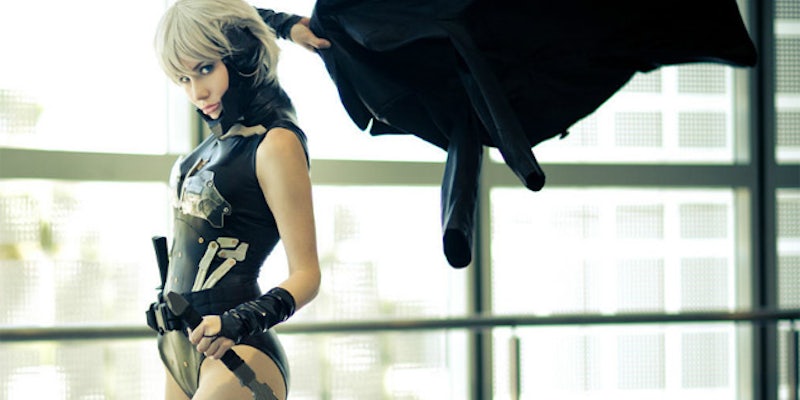 Crystal Graziano started out role playing online. Now she works for a game developer doing what she loves.

You could mistake Crystal Graziano for a character in a video game.

With colorful wigs and ornate, futuristic costumes that flatter her toned figure, it’s hard to believe the 22-year-old is a self taught costume designer.

Graziano is a cosplayer—an anime, video game or TV fan who creates and wears costumes as an homage to her favorite characters. For most participants, the activity is simply a hobby. Graziano began as an amateur, but her  talent has landed her a paying job this year with Red 5 Studios. And it’s all thanks to cosplay-specific social networking.

Today, Graziano works for Red 5 Studios by cosplaying Mourningstar, the female protagonist of the company’s premiere game Firefall, at conventions and events. In return, Red 5 Studios sponsors all of Graziano’s cosplay activities and provides her with professional photography sessions.

Red 5 chose her because of her looks, Mark Kern, CEO of Red 5 Studios said in an email. “We looked at cosplayers who we thought were tall enough and fit the look of Mourningstar.”

The company chose Graziano after video auditions followed up with both a phone and in-person interview, Kern said.

“I feel very lucky to be paid to do what I love, with no restrictions on what I cosplay,” Graziano told the Daily Dot. “The people at Red 5 Studios are very generous and supportive of the gaming community, including cosplayers, which is very refreshing.”

Of course, the opportunity didn’t happen overnight. For five years, Graziano has been promoting her costumes on various social networks for cosplayers, such as DeviantArt, WorldCosplay and A Cosplay Paradise. The more eyes on her costumes, the more potential for some of them to belong to employers. In this case, it was a watcher (aka follower) on DeviantArt.

“One of my watchers on DeviantArt said that they suggested me to Red 5, which I’m very thankful for,” she said.

At first glance, cosplay seems like a hobby too specific to require its own social network. However, stories like Graziano’s are becoming more and more frequent, making the case that social networking can mean the difference between an amateur fan and cosplay pro.

We couldn’t get any statistics from cosplay networks in particular, but Jobvite’s survey last fall made it known that 15 percent of people—or one in every six—found a job through social networking. When we talked to geek career guru Steven Savage, however, he estimated that numbers in the online cosplay community would be about the same.

Savage should know since he wrote the book on cosplay jobs—Focused Fandom: Cosplay, Costuming and Careers—which he released early this year. Throughout the book, Savage offers advice on how cosplayers can harness online tools in order to create careers.

Social networking is an inherent part of the cosplay world. There will always be some kind of social tools for cosplayers because if they can’t find them, they’ll make them or get someone else to.

Savage, who blogs daily about turning geek passions into paid professions at Fan to Pro, said that it’s important for cosplayers to use general online tools like blogging, Facebook, Twitter and LinkedIn to promote themselves. However, he said specific cosplay sites are essential for job networking.

“Cosplayers need to get pictures and data of themselves out there so their work can be seen and they connect with others. Sites like World Cosplay and others let you do that,” he said. “A social network that caters to these truly unique experiences, that understands the audience, is always going to be successful and well received.”

According to Savage, cosplayers can network for a wide variety of jobs through these sites, not just costume design and modeling. He said many of the cosplayers he profiled in his book used their hobby to branch off into photography, marketing or promotion careers.

If you can look at a picture, turn it into a costume, and wear it in public courageously, you’re showing (and gaining) a lot of experience. Cosplay is an intense activity that challenges and broadens people—and leads to opportunities.

Cosplay is just one of the hobbies in which Savage offers career advice; he also writes for fanfiction authors, fan artists, and more. He recommends DeviantArt as a networking site, but thinks social networks could become even more specific. He’d like to see a site exclusively for fan artists to network, for example.

“Any fan culture could use a specialist social network, but we don’t see what it is or what it could be,” he said. “We look at Facebook or existing sites and think there’s the norm. But someone, somewhere, has thought outside the box—and is going to build something that surprises us.  Only then will we go ‘Oh, yeah, good idea.’”

Of course, it’s not just having the tools; it’s using them, as Graziano has shown with her extensive Web presence. We didn’t have much time with this busy career woman, but we like what she told JapanCinema:

“I do think cosplay can open doors– at least through networking. I’ve known a few people who have gotten some great careers through the people they’ve met through it!”