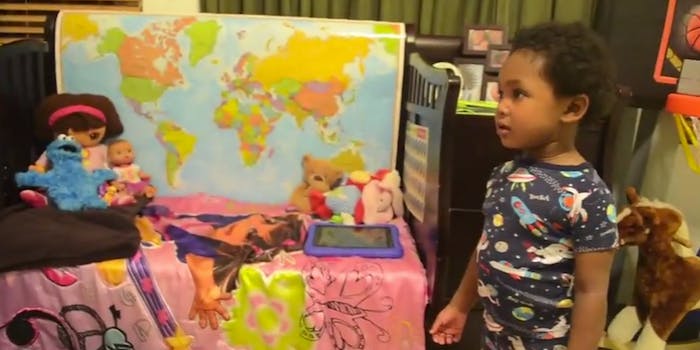 These future scientists are over the moon for ‘Cosmos’

The Neil deGrasse Tyson–helmed series brings a sense of nostalgia for those who have seen the original documentary series from Carl Sagan. For the younger set, not only are parents allowing them to stay up past their bedtime to watch it, they’re learning that we are all made of star stuff.

I sure hope people are recording #Cosmos for their kids to watch. How many children will become scientists because of this? #Awesome

The entertaining and educational show is getting people excited about science and space exploration again, and nobody embodies that more than Delilah.

She’s enchanted by everything she sees, and she can barely contain that excitement or sit down while she’s watching. (Wait for her to scream, “It’s the moon!”) And she actually knows her stuff, even if some of the concepts might not make sense to her until she’s older.

Cosmos was very much a family affair, and even with just one episode it’s already creating a bond that these kids will remember for years, just like many of the parents had when the original series aired. Cosmos is definitely on board for this one.

Watched @COSMOSonTV with my 9-year-old daughter. Restoring the awe to AWEsome for us both. Sparked some great questions. Thanks, @neiltyson.

Growing up, #Cosmos was my favorite show. Watching my daughter enjoy the new version with @neiltyson is a gift. pic.twitter.com/KJCiDIkWrL

@neiltyson YES! My 9 year old son is already glued to the screen to watch #Cosmos pic.twitter.com/bprYwKAOVF

Amazing! RT @ChrisHessLMT Best part of this show is that I am #WatchingCosmos with my son, and telling him about @neiltyson AND Carl Sagan.

We’re all children of the cosmos, no matter what age we are.