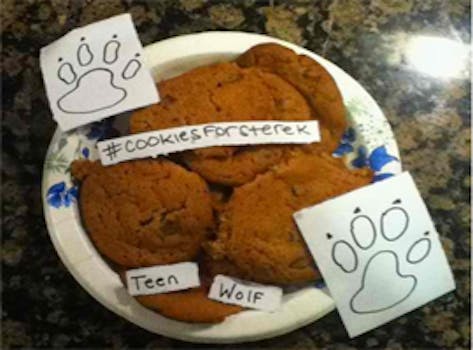 Behind Cookies for Sterek: A “Teen Wolf” fan campaign for gay romance

The repercussions seem to be endless for Entertainment Weekly’s decision to ban all fandom slash ships—queer romantic relationships between two characters who aren’t actually together in the narrative—from its poll on hot summer TV romances.

Fans of Teen Wolf characters Derek and Stiles, known as Sterek shippers, have always been noisy, vocal advocates for their favorite pairing, openly interacting with Teen Wolf creator Jeff Davis and encouraging him to make Sterek happen on the show. But ever since EW banned Sterek and other ships from the poll, specifically for not being an “acknowledged will-they-won’t-they storyline on the show itself,” Sterek shippers have become crusaders for a cause.

Because most fandom relationships aren’t part of the canon—the actual storyline of a show—EW’s singling out slash fans despite the overwhelming popularity of Sterek on the poll seemed to reflect decades of marginalization of queer characters and queer romantic relationships in Hollywood. When pop queer media site AfterElton stepped in to offer slash fans a chance to have their slash tournament after all, Sterek fans flocked to vote, propelling the ship into the final round, where it won with over three hundred thousand votes. And when a fan named Qhuinn decided to create an actual campaign to make Sterek happen, fans from all over the world responded.

The Sterek Campaign just wrapped its first month-long campaign, #cookiesforsterek. The initiative aimed to show Davis how much fans want Sterek to have a canonical story arc and took its inspiration from the language of Entertainment Weekly’s own poll. “[W]e want an ‘established will-they-won’t-they, scripted’ relationship,” reads the campaign’s Mission Statement, “and to get that we need to make our voices heard.”

Not only did Sterek fans manage to make #cookiesforsterek a trending topic on Twitter in the U.S. and other countries, Davis himself responded with a succinct, “Mmm… cooookies.”

The Daily Dot spoke to Qhuinn about the campaign, Sterek fandom, and the possibility of a canon storyline for everyone’s favorite lupine heartthrobs.

Daily Dot: So you wound up with 450 submissions overall?

We’re still receiving pictures! We received submissions from all over the world. We asked on Twitter for people to translate our Call to Love to their language and received dozens of emails. We never expected such reaction. We want to thank everyone who sent us their pictures and helped to make #CookiesForSterek a trending topic!

DD: What was your favorite submission?

We announced our winners Sunday! It was nearly impossible to pick just three. I’m quite fond of the Sterek cupcakes myself.

DD: Apart from Jeff Davis’ tweet, did you ever hear any response from him?

It’s obvious he knows about us, but still, people spent time baking and taking pictures, drawing, even writing fanfic; I guess everyone expected a reaction. I understand he may not have it easy to answer us directly. I personally don’t need him to say anything, but I know there are people waiting for more.

DD: Have people treated the campaign like it’s a spokesperson for the Sterek ship?

Not really, everyone is being so nice and supportive; all we get is positive and encouraging comments.

DD: Do you feel any kind of pressure?

I had never thought about it this way, to be honest. I’m doing what I want to do; I’m being part of something I love. No one is pressuring me; we are not pressuring anyone. That’s kind of our thing. No pressure, just love.

DD: Is the goal simply to vocalize support for the ship, or is the goal to actually get a canonical storyline?

Our goal is to show support and love, to say [to Davis], “Hey, the Sterek fandom is here for you; we love you! We’d love to see Sterek happen, but above all, we love you and your show.”

Of course we at the Sterek Campaign hope and wish for them to become canon. But we’re not using this project to ask him for it.

DD: How do you guys feel about the argument that having Sterek happen this early in the show’s development, especially in the development of those two characters, would be superimposed and shoehorned in?

We don’t even want Sterek to get together in Season 3. We want a slow build toward a romantic development between them. We want it to happen naturally. We already see their potential, but we know they are yet not there. We know they can be, though! That’s what we want, to see their journey, individual and together, toward a love story. That’s what the fandom is rooting for, IMO—the kind of romantic development any straight couple would have.

DD: Is there really a fandom-wide consensus on being willing to wait?

In general, I see people wanting a naturally evolved relationship, they want hints and stuff like that through Season 3. Some people even suggest they should end Season 3 with them nearly there or already there and make us wait for Season 4. I’m sure there are people wanting them NOW. This fandom is growing very quickly; there are tons of different opinions.

DD: How do you feel about the criticism that people who ship Sterek are more interested in fetishizing those two characters than getting more queer visibility. Because if they were interested in the latter, they’d be campaigning for Danny, the show’s only gay character, to have more screen time?

Oh, you brought the big guns out, I see! I can only talk about myself. For me, this is not about queer visibility. I think that’s very important. But what motivates me are these two characters in particular. I fell in love with them, individually and together, with their potential. That’s what made me start all this. There is something about Derek and Stiles together that calls to me. Jeff Davis said, if I recall it correctly, that he knew they were magic from the start. That’s exactly what I felt when I first started to watch Teen Wolf.

DD: If Sterek becomes a canonical storyline, how do you think it will impact other shows with queer subtexts or large slash fanbases?

I think Sterek becoming canon would change the game. It’d break the established rules! Even right now, just the way they are treating their slash fanbase is IMO changing other shows’ way of regarding their own.

DD: Are you sure you don’t feel pressure?

DD: Do you think people will move on to other fandoms during the hiatus or do you think your campaign and other projects will keep the momentum going strong?

I think this fandom is here to stay, and more people will join us during the hiatus. We at the SC are going to make sure to keep everyone motivated and show our love and support to Jeff and his show while we wait for Season 3. I also know that MTV is planning monthly contests, so that’s definitely going to keep people busy and happy!

DD: What’s next for you guys?

Next month we have #HowlsForSterek. #CookiesForSterek was a show of our love for Jeff Davis. Now with #HowlsForSterek we are going to tell him WHY we love him and Sterek so much. Our goal for this Call to Love is to collect all of the in-show reasons that fans love and support Sterek. We want to provide Jeff a glance into our minds, to see how we see the characters, to hear from us why we love them. Our next goal is to send Jeff Davis and the cast real cookies. We’re in touch with the MTV to bring them some cookies when they start filming Season 3.

But what I’m most excited to tell you about is our charity project. We’re in contact with the MTV to collaborate together in this! There’s nothing certain yet, but we’re going to try to bring to the fandom an amazing charity project to adopt a wolf. We want to adopt at least one wolf in Jeff’s name. We’re in talks with different associations to see how we can do this. We actually wanted to adopt two and call them Derek and Stiles, but we’re still at the beginning of the project. It could change a lot.

DD: You started out with a bang!