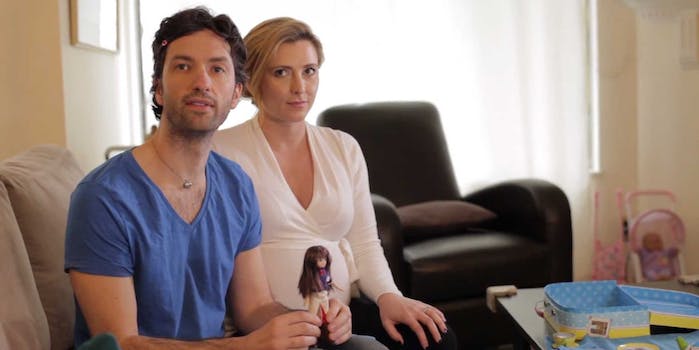 Here’s what happens when adults reenact conversations with a toddler

When a grown man says the same thing that his 2-year-old daughter just said, it's downright creepy.

Most of us take the “kids say the darndest things” approach when interacting with young children. It’s hilarious, adorable, full of wisdom, and sometimes quite impressive.

But when a grown man says the same thing that his 2-year-old daughter just said? It’s just downright creepy.

Matthew Clarke is testing this out with Convos With My 2 Year Old, a new webseries on YouTube from Warmland Films. There’s only one episode out so far, but it already sets a dark tone for the relationship between Clarke and his daughter.

Clarke and his wife Leila Harrison play themselves, while the role of their 2-year-old daughter Coco is portrayed by David Milchard. In the debut episode, Clarke and his wife are trying to figure out dinner for the night, but Coco’s not having any of it.

“You can’t talk to her right now because I’m talking to her right now,” Milchard says. He’s dressed in a girl’s purple top, jeans, a heart-shaped necklace, and a small pink hair clip that just sells the part even more.

Clarke doesn’t get it, according to Coco. She’s not his wife. She’s “the Princess.” And Clarke isn’t allowed to talk to the Princess.