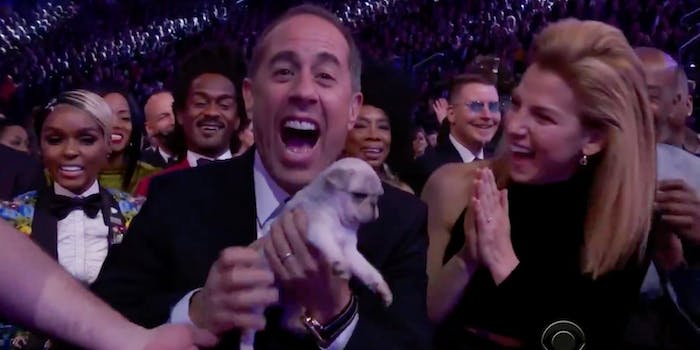 Consolation puppies stole the spotlight at the Grammys

Grammys host James Corden pulled an Oprah Sunday night and announced—to the delight of everyone—that all nominees who don’t win an award will be given a “consolation puppy.”

Didn't win a #GRAMMY? That's okay, you can get a consolation puppy.

Watch The #GRAMMYs now on CBS and CBS All Access: https://t.co/rtZ7sSGFOC pic.twitter.com/d2qratWobI

Viewers on Twitter were quick to point out that puppies were actually a way better gift than the Grammys award. Judging by the reactions of celebrities in the crowd like Jerry Seinfeld and Jim Gaffigan, they agree.

One of consolation puppies just got walked past me so the night is pretty much downhill from here. #GRAMMYs

Everybody gets a puppy!! #GRAMMYs pic.twitter.com/hdCX0GDrQc

FORGET THE GRAMMY GIVE ME A CONSOLATION PUPPY#GRAMMYs

Whoever came up with the puppy consolation prize idea I must befriend. And now I want to be nominated to lose and get a puppy. #GRAMMYs

I want a consolation puppy for having to watch Sting again, at the #Grammys, again.

CAN I GET A CONSOLATION PUPPY FROM THE #GRAMMYs ??? pic.twitter.com/bwXzWigLi6

Whether or not Corden was just joking, it was the fans who received the greatest gift of all Sunday night—witnessing Seinfeld’s reaction to a puppy hopping into his hands.