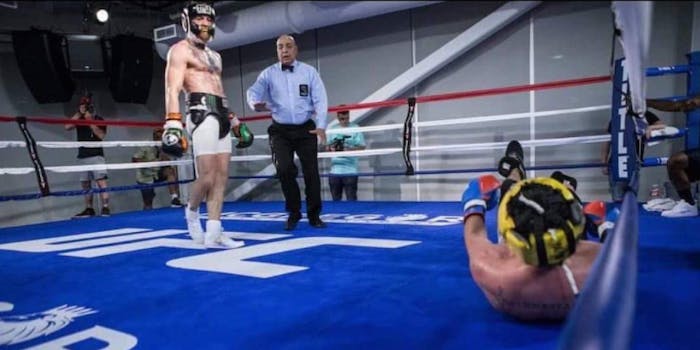 Here's the controversial moment everyone has been talking about.

The highly anticipated fight between Conor McGregor and Floyd Mayweather has contained plot lines within plot lines. The most compelling of which has been the sudden exit of McGregor’s sparring partner Pauli Malignaggi, a former IBF and WBA World Champion, who has been thrashing McGregor on Twitter.

What was already a tense working relationship boiled over after McGregor’s team released photos in early August of a practice session that appeared to show Malignaggi knocked down. He claimed he was pushed and called for the release of the full sparring session to clear his reputation.

Its not nice 2 paint a pic that isn't true, this was a pushdown in sparring, post the whole video rounds 1 through 12 UNEDITED https://t.co/R82BLiMMVm

Nah I pretty much talked shit that whole sparring session while I beat the breaks off him, the push down was his frustration from it. https://t.co/m0IDBP0pB2

For all the people who think @TheNotoriousMMA can't box. This is gonna be a FIGHT! Conor vs Paulie Malignaggi former IBF/WBA World Champion. pic.twitter.com/CcTkFq0fhr

Here is the video everyone wanted to see of Conor vs Paulie Malignaggi former IBF and WBA World Champion @TheNotoriousMMA pic.twitter.com/GfFP3SKsye

The 30 seconds or so of footage does show the knockdown in question, but the matter is far from settled, especially from Malignaggi’s perspective. He’s been sparring with just about everyone on Twitter.

You dumbass this view shows the hook actually missing me completely lol. If it landed my head wouldn't stay face down. https://t.co/TgN73V3Imm

Don't slow this down too much, might wind up with me telling the truth and hurt their feelings lol. https://t.co/8VLUBiB7Vl

I think it's clear I'm being pushed down by back of my neck any1 that what's to see it will c it. Out of 36 minutes they have 45 seconds lol https://t.co/N1Vvs5tCp6

So, was it a knockdown? It really doesn’t matter. We’re just two weeks away from finding out whether McGregor can really compete in a boxing ring. Malignaggi doesn’t like his odds.

Let them have their 35 seconds. They know what happened last week. It's a house of Cards, 2 weeks left. https://t.co/wqL84jsTRc