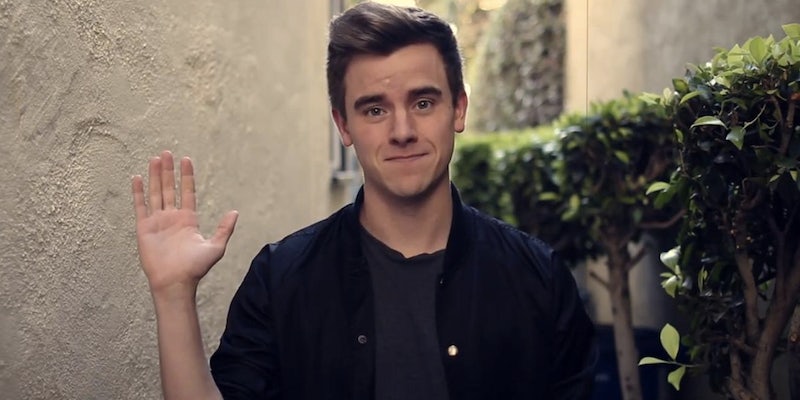 “This really was a brand-building exercise, and it’s starting to turn into something bigger.”

Connor Franta is not a singer, but he’s got an album in the Billboard Top 200 all the same. That’s because the YouTube superstar is using his social influence to curate and promote a compilation album to his loyal fanbase.

Franta’s new initiative, Crown, is a mixture of pop and alternative tracks that caught the 22-year-old’s ear as he’s been exploring his musical tastes this year.

“I’ve always enjoyed music, and I’ve gotten into it way more this year because of Spotify,” Franta told the Daily Dot. “I started building playlists and finding more artists and genres that I had never heard of or was into. These artists had really good music but low playcounts.”

To help up the profile of his new favorite musicians with the help of his millions of social media followers, Franta joined forces with Opus Label, a music distribution and licensing company that focuses on celebrity-helmed compilation releases using the power of social media. The idea started when company cofounder Jeremy Wineberg partnered with Perez Hilton to promote compilation albums of the music Hilton frequently promoted on his website.

“The concept with Connor is basically the same. It’s sharing your playlist at that moment in time with your fans, and using primarily social media to sell your music,” Wineberg explained. “Connor came with 12 artists that he loves, mostly new artists that haven’t really been promoted before. Through Twitter and Facebook and YouTube, we were able to get him to number 12 in the [iTunes] pop music store. We moved 30,000 albums on streaming sites and close to 3,000 albums just on iTunes.”

The compilation even broke the Billboard Top 200, and it served as the debut platform for a track by Manicanparty. Franta says the response has been overwhelming—and surprising since he’s never dabbled in the music space before. Some fans were even disappointed he wasn’t dabbling more directly.

“Once people got over the fact that it wasn’t me singing, because of course that’s what they want, even though I remind them I cannot sing,” Franta laughed. “Once they got over that, everyone was super down for it and super into … me doing something outside of what I normally do. I’ve never done anything revolving around music. Seeing something I created on iTunes was never something I thought would happen in a million years.”

Franta found fame on YouTube as a vlogger—both solo and as a part of Our2ndLife, a collaboration of young male vloggers that Franta parted ways with this summer. On his personal channel, where he talks about sex, relationships, and his life in general and collaborates with other YouTube elite like Tyler Oakley, Marcus Butler, and MirandaSings, he’s grown his audience to 3.5 million subscribers. But Crown is a chance for Franta to spread his wings beyond his YouTube persona. Andrew Graham, Franta’s manager at Big Frame, explained that finding next steps for YouTube based creators is key, and for Franta the move to a curatorial and tastemaker state is a natural step.

“This really was a brand-building exercise, and it’s starting to turn into something bigger,” Graham explained. “But that’s the kind of trajectory every talent on YouTube has taken. They went on to YouTube just to share their voice, and it became something that is a business.”

Franta payed particular attention to the business as he crafted Crown, from hand-selecting the songs to spending hours debating what to name the brand.

“I was looking for cool words,” explained Franta. “I don’t want to just call this ‘Connor Franta, blah blah.’ I don’t like attaching my name too much to projects like that. I want it to be more about the project and what I’m producing than just my name. I came across ‘crown,’ and a crown signifies power and royalty and importance. And these songs are the crown jewels of the music industry, but they’re diamonds in the rough, too, because not too many know what they are.”

According to Franta, the concept of Crown won’t stop at just music compilations, although he does want to create another one soon.

“Not to give away too much, but I definitely do see it growing into more than just my compilation brand, if you will,” Franta said. “I see it branching out into other brands in other industries. I’ve begun working toward that and few secret projects.”

Those secret projects could possibly include incorporating Crown into Franta’s capsule clothing collection, live-events, and even a potential consumer beverage product, according to Graham.

For now, Franta is simply excited about connecting with the musicians he admires. He says he now counts Betty Who as a friend after being a huge fan of hers for years. Many other artists that were part of Crown have responded favorably to the inclusion, including the Kite String Tangle, whose “Arcadia” Franta sites as one of his favorites on the compilation.

“I think they tweeted it, when they followed me on Twitter, I was super happy,” Franta gushed.

Even YouTube superstars can get excited over some social media love.