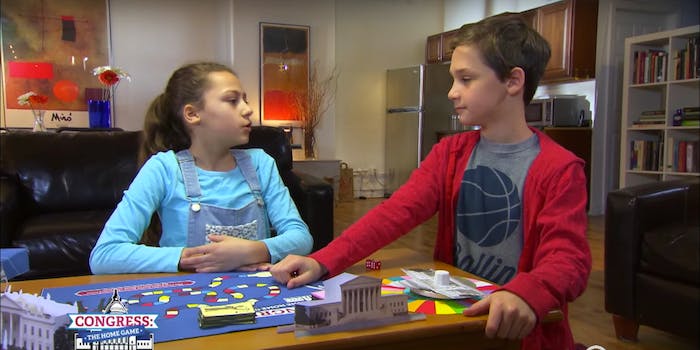 ‘The Daily Show’ turned Congress into a frustrating board game

If you think these rules are ridiculous, watch what happens in Washington.

The battle over filling Supreme Court Justice Antonin Scalia’s seat just got even uglier—but for many Americans, it’s all part of a very familiar game.

After Republicans on the Senate Judiciary Committee vowed not to consider any Obama nominee, Trevor Noah pointed out that the act was unprecedented. But as Jordan Klepper countered on Tuesday night, it’s precisely what we’ve come to expect—especially after playing Congress: The Home Game.

A rulebook so big that nobody bothered to read it, rampant cheating, changing the rules on a whim, celebrating a victory because your opponent is losing as much as you are, and taking a month-long vacation before your turn? Yep, that’s Congress all right.

But no one really knows how the game is played—not even Congress itself, we imagine.