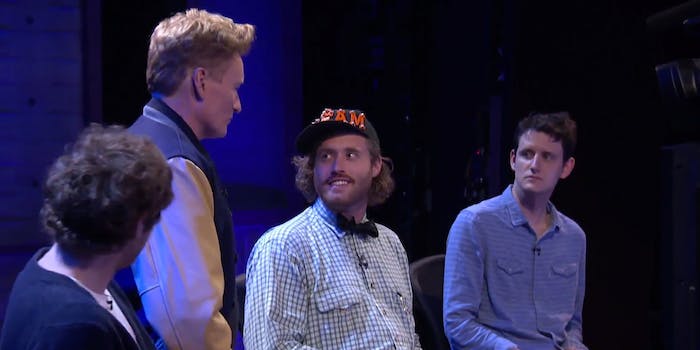 'All I care about is that I took a life.'

It’s always good to know how to work in teams in video game play because it makes it that much easier to team up against someone like Conan O’Brien.

He got his hands on Halo 5: Guardians and invited Silicon Valley’s Thomas Middleditch, T.J. Miller, and Zach Woods to play against him, Andy Richter, and Aaron Bleyaert. It doesn’t take long for Team Coco to discover that they are really, really bad at this—even worse than usual for Clueless Gamer segments.

“We are awful at this, but awful in a way that’s almost intriguing,” O’Brien noted.

But in between rounds of total annihilation, they manage to get a little philosophical before O’Brien calls in the big guns—aka the multiplayer designer for Halo—to play for him. It gets ugly.

The outtakes are almost even better than the games.