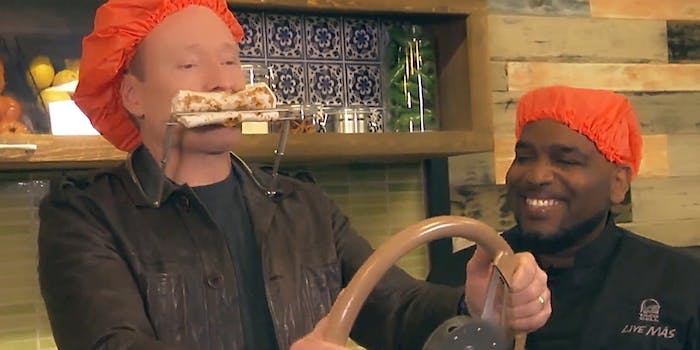 Stomachs will be growling for one reason or another.

Conan O’Brien is making dreams come true, one stomach ache at a time.

Even though that’s really Ellen DeGeneres’ schtick, Conan used his IT guy’s Taco Bell obsession to take a giant tour of Taco Bell headquarters to see what goes on behind the scenes. It feels like one giant endorsement and may cause some to crave the food before 10pm, but O’Brien manages to make things as weird as possible by creeping on the taste testers, asking the inappropriate questions, and offering up a number of suggestions that would probably never work in the long run.

He even makes his own taco: the O’Taco, a monstrosity with cabbage, potatoes, corned beef, and Guinness. And people were crazy enough to eat it. But that’s what some would say about the people who eat Taco Bell in general.