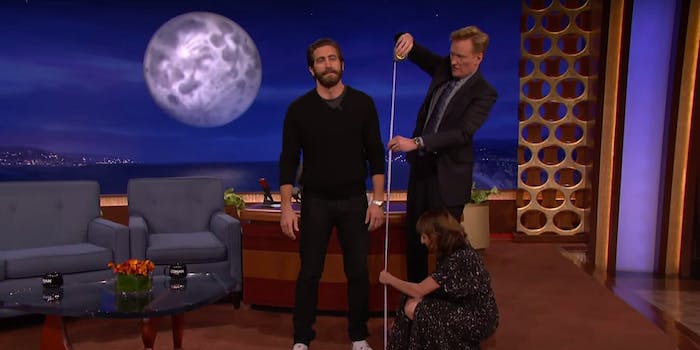 Has the Internet's most pressing question been solved?

Thanks to a bit of hands-on detective work, Conan O’Brien and Starlee Kine have finally solved one of the Internet’s biggest mysteries.

Kine, creator of the podcast Mystery Show, rekindled the Internet’s obsession with celebrity heights—but out of countless celebrities, it was Jake Gyllenhaal who caused the most debate. It was a matter of inches, and it created pages upon pages of debate. Gyllenhaal appeared on Mystery Show and told Kine that he was 5 feet 11.5 inches tall. That solved it for some, but others didn’t exactly trust the source.

Conan O’Brien took matters into his own hands on Thursday night. He brought Gyllenhaal onstage, even making him take his shoes off, before finally measuring him and putting the matter to rest.

Is this finally the end of it? Given that some are pointing out that Gyllenhaal wasn’t exactly standing up straight when he was measured, probably not.