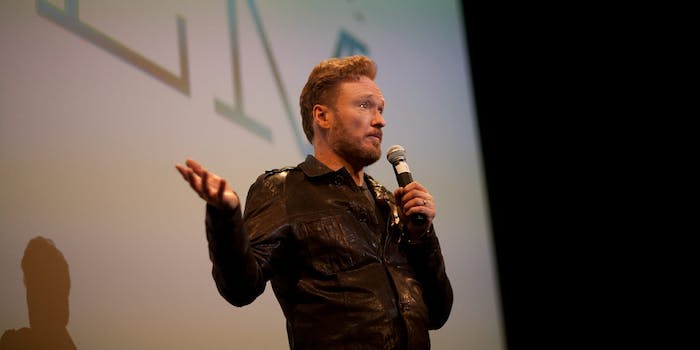 ‘Conan’ goes Cuban with an episode filmed in Havana

It's the first time a late-night talk show host has been in the country since 1959.

Conan O’Brien isn’t one to shy away from weird, over-the-top concepts with his remote shoots, but his latest adventure will be more than just a water-cooler topic the next morning—it’ll be historic.

O’Brien spent the weekend filming Conan in Havana, Cuba, making him the first American late-night television host to visit and film in Cuba since 1959, when Jack Paar went over to interview Fidel Castro for The Tonight Show (a trip for which he was criticized). Like Paar’s voyage, this programming choice by O’Brien and his staff is likely to bring a fresh wave criticism from certain political circles.

The episode, set to air Mar. 4, will give viewers a glimpse into what life is like in Cuba. Knowing O’Brien, it’ll also be full of wacky and potentially awkward moments, even if he’s only allowed to show certain parts of Cuban culture.

President Obama announced that the U.S. and Cuba would start resuming diplomatic relations back in December, a seismic shift in foreign policy that quickly drew criticism from conservatives. Since then, broadcast news anchors Scott Pelley, David Muir, and Brian Williams have all reported from Cuba for their nightly news programs.

Since Conan doesn’t film an episode on Presidents Day, the three-day weekend gave the crew enough time to travel to Cuba and shoot everything before the next in-studio episode. Conan’s presence in Cuba went largely unnoticed, save for a few photos from members of the U.S. wrestling team, who were in Cuba to compete in the Cerro Pelado International wrestling tournament in Havana on Sunday.

Got the chance to meet one of my favorite celebrities, @ConanOBrien while staying in #Cuba! #TeamCoco pic.twitter.com/aKfOvAjpbg