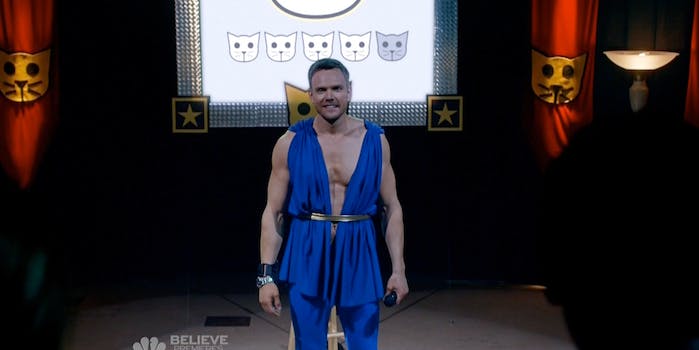 Someone is making the ‘Community’ social raking app a reality

Meowmeowbeenz will soon be all too real.

This week’s episode of Community was about a social networking app so addictive that it transformed Greendale Community College into some kind of Hunger Games-esque dystopia.

Now, for some inexplicable reason, some Community fans have decided that Meowmeowbeenz should become a reality.

The app, Meowmeowbeenz, allowed users to rate each other out of five, which eventually led to a nightmarish social hierarchy where popular Fives wore togas and hung out in a futuristic lounge while Ones were banished to the parking lot. So the a real-life version of the app will presumably appeal to Mean Girls, Slytherins, and anyone else who prioritizes social climbing over, well, everything else.

On the Meowmeowbeenz subreddit (yes, it took less than a day), redditor pnewhook has already decided to design the real Meowmeowbeenz app, with more than 1,300 people pre-registering on its website overnight. “I’m a full-time software engineer so I’m capable of doing it,” wrote pnewhook, “but if anyone would like to join, I’d love help.” Several other redditors immediately signed up to the task.

Considering the fact that Meowmeowbeenz is basically a glorified upvoting system for real life, it’s no real surprise that Reddit was the place that decided to take it seriously. The question is, will Community fans still be interested once the app is actually out there?