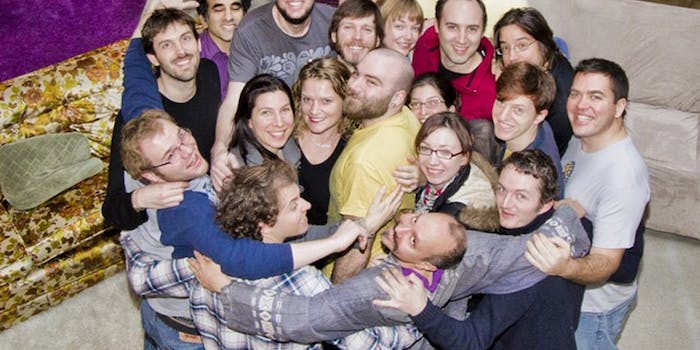 It isn't just about finding a place to lay your head for the night; it's all about community.

Tom Dibblee moved to Paris in 2009 without a place to live. It was in his nature, he said, to make those drastic moves, to jump ship from America and touch down in the City of Love and Lights with a thin wallet and a plan to figure it all out on the fly.

He made it work by sleeping on the couches of strangers until he found himself an apartment a month later.

Tana Hoffman did something similar while in between semesters at Connecticut College. She took off to Norway for a week, where she’d made arrangements to crash on a number of couches around the country, each one owned by a person she’d never met.

On her way back to the states, Hoffman stopped in Iceland, where she again stayed on a stranger’s couch. That time, Hoffman didn’t just sack out at night; she and her host rented a car together and toured their way throughout the country.

Dibblee and Hoffman were able to come upon their accommodations through CouchSurfing.org, an online community made up entirely, as Dibblee told the Daily Dot, “of people willing to sleep on a stranger’s couch or invite a stranger to sleep on their couch.” Founded in 2003, the site is the choice social network for 3.8 million risk-takers, thrill-seekers, curious hosts, and serial travelers who prefer the idea of intense cultural immersion to dolled up hotels.

There’s little that actually defines the CouchSurfing community. The average age is 28, but there are more than 200,000 members between the ages of 40 and 49—and even 734 members over 80. They come from the United States more than any other country—its 805,387 members make up a population that’s twice that of any other country—but both France and Germany host more than 300,000 members, and 246 other countries, from places like Spain all the way to Tonga and Vanuatu, are represented in the community.

Gender? That’s about even; males make up 51 percent, with women comprising 43 percent and six percent of the accounts on the site run by multiple-person homes, what CouchSurfer classifies as “Several People.”

In all, the community has helped register over 4,206,000 successful surfings, created more than 4,150,000 friendships, and logged a surplus of 6,729,000 “positive experiences,” numbers that make CouchSurfing one of the most trusted communities currently operating on the Internet.

“CouchSurfing attracts a groups of individuals that, just by virtue of their involvement in the project, I can trust automatically,” said Jake Coffey, a graduate student at the University of Arkansas, Little Rock, who joined the community in 2007 while he was backpacking through Europe.

“You’re not staying at a hotel,” he said.

“You’re being hosted by a human being who isn’t charging you, and they’re saying ‘This is my community. I’m interested in the experience of intercultural exchange.’ Usually it’s people, especially I’ve found in Europe, who really enjoy hosting people and are very prideful of their hometown or home country.”

That’s something Dibblee discovered firsthand when he arrived in France.

“All of my friends in Paris came through CouchSurfing,” he said.

Opening up one’s home to strangers is of course at the root of the CouchSurfing community’s existence—in one way or another, it’s in the name itself—but the appeal of CouchSurfing goes far beyond finding a free place to crash.

“The CouchSurfers were my safety net when I first got here,” said Emily Hill, an Atlanta native who packed up and moved to Austin, Tex., in November.

“It was my instant access to a social group, and it created this friend net for me. Moving here without any friends at all—the Austin group, the forums, and activities they have—I was just on [the site] all the time figuring out who was doing what and setting up meetings with people that I found interesting.”

“I’ve used it for pure social networking in countless ways,” echoed Dibblee, who know lives in Los Angeles. “When I lived in New York, I used it to find language exchange partners. I started an urban hiking club and would put posts for that up on CouchSurfing. I used it to try to find apartments, because I wanted to have International roommates who had been on the backpacker circuit.”

It’s that type of resounding support for CouchSurfing and its many benefits that’s helped the site grow into the behemoth it is today. But the community is not without concerns, like any growing city. And CouchSurfing is most certainly growing.

The community welcomed roughly 16,000 new members per week as recently as December 2010. Now that weekly growth is closer to 25,000 people, there’s a sense of entitlement coursing through the minds of its longstanding members. They say that the influx of new members has diluted the community and turned it into a collection of people simply looking to save money on a hotel room.

To a certain extent, this is true. New blood has made it such that tenured community members like Hoffman, who rarely uses the site to find accommodations anymore, have grown wary of certain pockets of the community. They mention the 2009 rape of a Korean woman who was travelling through England and offer defeated responses like “at some point, that was probably bound to happen. When your whole business is built on letting strangers sleep on other strangers’s couches…”

They haven’t shut CouchSurfing off; they just don’t know their neighbors in the community as well as they used to.

Site cofounder and CEO Daniel Hoffer blames that fallout on the people who have painted CouchSurfing as a freeloader’s bed and breakfast.

He told the Daily Dot:

“Sometimes people read about us through the press, and the press tends to focus on one piece of what we’re about: that you can stay for free in someone’s home, thereby saving money on a hotel. People sign up waiting for their free lunch, which is not really the point. That’s kind of a fringe benefit, but that’s not what makes the community special.”

What makes the community special is its ability to maintain a strong semblance of its core values even in the face of immense change. Aside from the population increase, CouchSurfing International, the organization that supports the CouchSurfing community, has evolved into CouchSurfing International Incorporated, a for-profit business that in August raised $7.6 million from  Benchmark Capital, a Menlo Park, Calif., group that has previously helped fund Twitter, Instagram, AOL, eBay, and Zillow.

Initially, community members who first helped make CouchSurfing the place it is today scoffed at the idea. They liked the DIY nature of it all, they said, and came to appreciate the clunky website—one that until recently was operated by forty-four individuals working mostly part-time. They were hesitant to change anything that would dilute the thrill of stepping into someone’s home they didn’t know and learning about their culture.

But opposition has waned of late, and in the six months since going for-profit, some of the community’s most vocal opponents have started to come around. They’ve come to understand CouchSurfing’s need to go corporate in order to stay afloat, and they’ve come to realize that change may not be as bad as they’d once perceived.

“There could absolutely be a tipping point when that feeling is lost, but I don’t think we’re anywhere close,” Coffey said.

“It’s really popular now, and that’s exciting, but I don’t see how this growth rate can be sustainable. The very idea of CouchSurfing is so beyond the realm of possibility for so many people they don’t see that happening. Like anything else, you just have to be smart about it.”

And keep close attention to the CouchSurfing mission, which envisions “a world where everyone can explore and create meaningful connections with the people and places they encounter.”

For people like Dibblee and Hoffman, that means further investing themselves into the CouchSurfing community, doing what they can to enrich the lives of those they come across and keeping an open mind to new ideas and opportunities. Dibblee says that he wants to write a book, and instead of going on a standard book tour where he stays in hotels and speaks in the basements of Barnes & Nobles around the country, he wants to travel the world on the CouchSurfing circuit, conversing with his hosts and their friends about what he wrote and why he wrote it.

Hoffman simply wants to pay CouchSurfing forward and honor the commitment the community made to her when she was younger.

“You kind of get this feeling like you owe CouchSurfing,” she said.

“I lived on couches in Europe for three months and didn’t pay anybody a dime. This entire community literally supported me for three months. For me to say, ‘Oh, I can’t host this girl who’s coming through Winter Park and wants to ski for three days…’ It definitely pushes the message of ‘Pay It Forward.’ And if you’ve never hosted and you’ve only slept on people’s couches, I would notice that. People would notice that.”