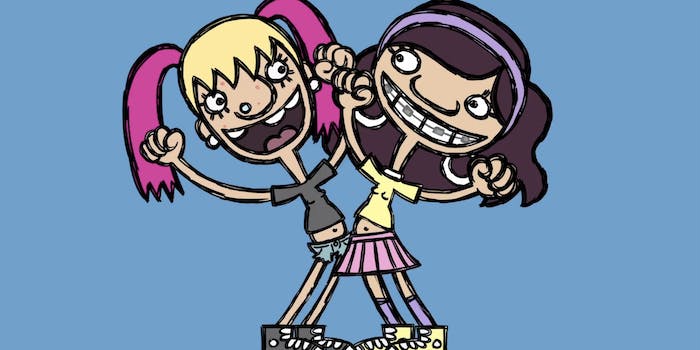 Slogging through Comedy Central’s ‘Biatches’ is a b**ch

How a webseries fell short of its aim to be the female Beavis and Butt-Head.

Biatches, Comedy Central’s new animated webseries, aims to be the female Beavis and Butt-Head but instead gives us an unintentionally humorless version of that Idiocracy in-joke, “Ow My Balls!”

Is swearing funny? Of course it is. What about queefing? Again, hilarious. They are delightful glacé cherries that sit resplendent atop the delicious cake that is ribaldry and bawdiness.

But does anyone like them on their own? Of course not, they’re horrible things—sweet, oddly clear, and filled with enough sucrose and glucose syrup to cause some sort of damage. As anything more than decoration, they are redundant.

Biatches, co-created by Dana Min Goodman and Julia Wolov (of MTV’s Faking It) and one of the six new comedies from CC: Studios—the digital arm of Comedy Central—is all garnish. It makes me feel old to say this, but the show really is just swearing and two girls talking about their private parts. Other than a couple of racist caricatures, that’s about it. It’s an arduous 3:28; watching the first episode is akin to being squawked at by a parrot that lives in a locker room that only idiots use.

We’ve seen the formula before—two sex-obsessed, fractious teenagers—but Beavis and Butt-Head had more than just dirty mouths and one-track minds. As shallow as the boys were, they lived in opposition to other characters who actually cared. There’s nothing like that here. After three episodes, I can’t even remember what the two main characters’ names are.

It’s an unfortunate waste of Bento Box Animation. Someone should have realized that before they started drawing. There will always be a place for the joys of crudeness, but that doesn’t mean that it can stand alone as comedy.