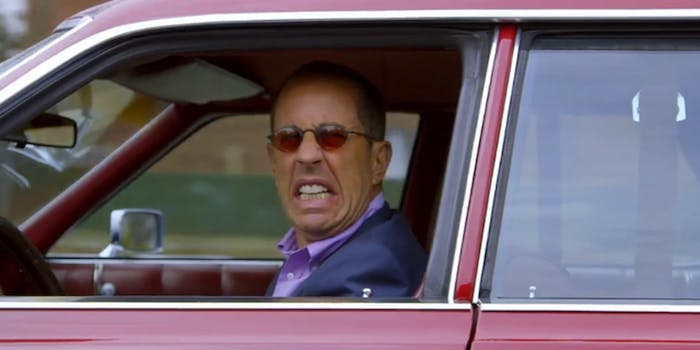 In an interview last year, Jerry Seinfeld explained why his webseries, Comedians in Cars Getting Coffee, would not, despite its success, be making the transition to television. TV talk shows are merely “promotional vehicles for the industry. They’re not talk shows, per se, they’re kind of setup talk shows. ‘I’m gonna ask you this, then you say that.'”

Despite his own show’s blatant product placement (which is probably excusable because someone’s got to pay for this, right?), his guests seem to want to be there. It’s not just the completion of another step of the publicity circuit. There are “no notes” and the good stuff “comes up because I’m really curious,” and is foregrounded by deft, snappy editing that zeros in on the best 11-20 minutes of what must be hours of shooting. There doesn’t have to be a set episode length so you know you’re only getting the good stuff.

In its fourth season, the series has inspired seemingly every corporate concern to want their own celebrity-led copycats, which are neither as funny nor as well conceived. It’s amazing that something that was only first seen in July 2012 has already attained a status where it doesn’t have to change, and if it did, followers would be outraged. That’s a thing called brand loyalty, something I’m sure Acura is well aware of.

And it hasn’t really changed. The show has a new, consciously cheesy theme song and it launches season four with a guest who is neither a comedian nor very funny: Sarah Jessica Parker.

Why Seinfeld started the series with SJP is unclear. Waiting in the wings are episodes with Aziz Ansari, Jon Stewart, and George Wallace (indeed the show has quickly become a requisite on comedic resumes), so this is hardly a permanent, thematic shift for the program. But it is a nice change of pace. Although CICGC often finds itself in earnest territory, there is always a faint tension caused by both parties searching for a comedic vein or punchline. They are still performers after all.

SJP laughs a lot unnecessarily and it seems initially that she will be the butt of the episode’s joke. Seinfeld often matches a featured classic car with his guest (Chris Rock got a 1969 Lamborghini Miura, “a screaming, piercing black car,” in Rock’s words), and Parker gets a 1976 Ford Country Squire, apparently her own, that Seinfeld doesn’t like: “It’s big, wasteful, got stupid fake wood-panelling … LTD on the side. You know what it’s limited to? How many of these damn things we can sell”.

But it’s an isolated event in an epsiode that focuses on parenthood, and arcs into a conversation about their own insecurities as providers for their progeny. For a while, Seinfeld becomes the guest on his own show. Driving down the Long Island Expressway, where Harry Chapin died in a VW Beetle, Seinfeld becomes reflective and muses about how his song “Cat’s in the Cradle,” “messed up a lot of dads.”

As an episode it’s probably more poignant than funny, but that shouldn’t worry regular viewers because the same pacing and editing from previous seasons is still present. And so is Seinfeld. His upcoming guests have plenty to look forward to.