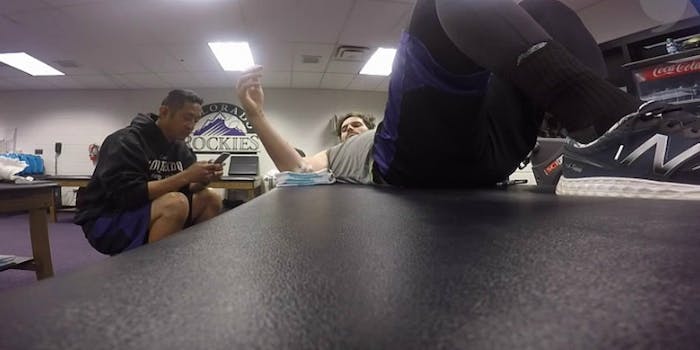 Rockies pitcher turns his rehab into a lonely, GoPro-assisted film

When the fans stop chanting your name, the world can be an awfully hollow place.

Rockies relief pitcher Adam Ottavino suffered a bad elbow injury in April, and after undergoing Tommy John surgery in May, he had a long road to travel as he rehabs and tries to reclaim his position as Colorado’s closer.

The Tommy John surgery, the most dreaded procedure a pitcher can undergo as a tendon is transferred from one part of the patient’s body and used to help reconstruct the ulnar collateral ligament, can take a year (or possibly even more) to fully rehab the arm.

After the surgery, a pitcher isn’t allowed to throw for the first four months after he gets out of the operating room. Perhaps out of boredom, Ottavino documented the first few months of his recovery with a GoPro camera. The Players’ Tribune then posted it on YouTube with this description:

It takes 16 weeks until you can safely throw a baseball after Tommy John Surgery. The following short film documents some of what I did during my 16 weeks. I recorded everything with my GoPro camera because it was small and discreet and I didn’t want to get in everybody’s way. When I watch it, it reminds me of the progress I have made since the surgery, as well as the work that still lies ahead in my recovery. I want to thank the Colorado Rockies for allowing me to rehab in Denver and in particular Scott Murayama for working with me everyday and putting up with me.

The film is a study in isolation. Fans might forget about a ballplayer when he’s on the mend and not in the lineup every day, but Ottavino is here to remind us that he was still working, still earning that paycheck, in the bowels of the stadium when virtually nobody else was around.

So, he undresses and dresses with one arm, completes his arm stretches in the trainer’s room or face-down next to the whirlpool, works out his lower body and tries to keep up his cardio, and eats fruit with nary more than a baseball game playing on the TV above and tens of thousands of empty seats outside the door.

It reminds us of this simple fact from which nobody ever can escape: When the fans stop chanting your name, the world can be an awfully lonely place.