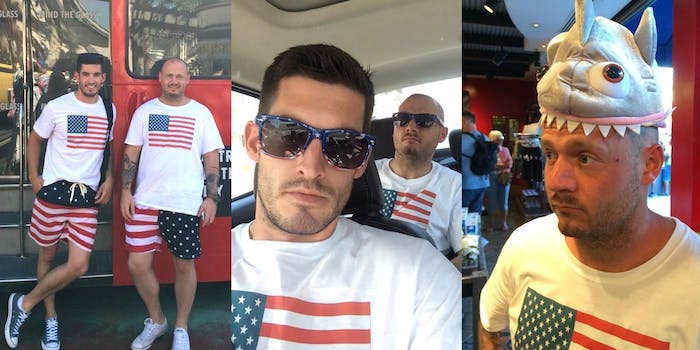 They take American flag attire to a whole new level.

A new British invasion has swept onto America’s shores this week and is making a pop culture smash. No, it’s not the One Direction lads; this new sensation are a duo who’ve dubbed themselves the Colburn Idiots Abroad and are posting their travel videos on YouTube to an ever-increasing fanbase.

Within two days of publishing their first video this week, they’ve commanded over 750,000 views and 13,000 subscribers to their channel. Anthony Kirkby and Paul Tranter, the pair behind the videos, told The Daily Mail they planned their uploads to share their vacation with friends back home.

“We quite often make stupid videos back at home to make our friends laugh and we thought this would be a funny thing to do,” Tranter said. “We can look back on it in years to come and laugh watching them back.”

Warning: These videos contain language that may be NSFW.

The videos are far from polished, and only half the time do they remember to shoot in horizontal instead of vertical. Their appeal is mostly the no-holds-bars attitude of the pair, and their dedication to documenting all the wild and weird moments they share on the trip. They don stars and stripes attire, wander Hollywood Blvd., and document the various things they break during their misadventures.

Their sudden success makes one wonder: What will happen when these idiots are no longer on vacation?