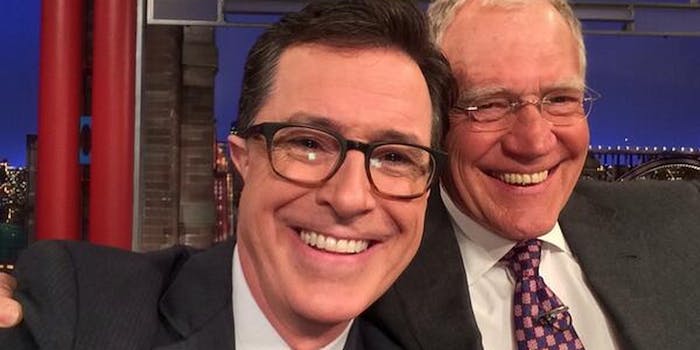 Colbert and Letterman take selfies on ‘The Late Show’

If Stephen Colbert’s latest stop on The Late Show is any indication, he’s gonna be just fine taking the reins from David Letterman next year.

He stopped by Letterman’s show Tuesday night, the first time since the announcement was made, and he left his satirical character on Comedy Central. Like his first appearance in 2005, he and Letterman caught up about nothing particularly groundbreaking with a bunch of one-liners thrown in, but it was still perfectly enjoyable.

And what has become a sort-of tradition for Colbert, he marked the occasion with a late-night host selfie. Letterman posted the photo as well, but Colbert had the much better caption.

As Colbert later revealed, this wasn’t his first chance to work on The Late Show. He was offered an internship while he was in college in the ’80s, but he turned it down because it didn’t pay. He later applied to be a show writer with writing partner Paul Dinello in 1997, but by the time The Late Show got back to them, they had already gotten Strangers With Candy.

Colbert still had his “Top 10 List” from that application, and he brought it on the show to perform. It’s a little too polished, but it’s the sort of thing that would’ve worked great on The Late Show.