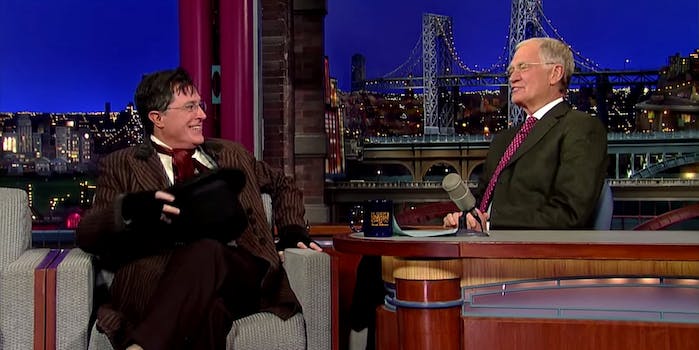 He left his TV persona out of it when he made his first appearance on The Late Show in 2005.

The biggest question people have since CBS announced that Stephen Colbert would take over as the next host of The Late Show is how Colbert, who plays a right-wing pundit on The Colbert Report, will be as himself. By looking back at old interview footage, we might get some clues.

Colbert has appeared on David Letterman’s show multiple since starting The Colbert Report, and while it might be hard to beat Colbert’s ridiculousness at the top of his game as he promoted his cameo in The Hobbit: The Desolation of Smaug back in December, it’s his first appearance that shows a different side to him.

He went on the show in 2005 before The Colbert Report premiered, and in it he opens up about growing up in a family with 11 children in South Carolina and competing in a boat race with his own children. There’s plenty of humor involved, but with Letterman’s last show still up in the air, it’s a small preview of what Colbert might actually be like on The Late Show.

He seldom does interviews nowadays out of character these days, so it’s real treat for the people who have followed him for years.

On last night’s show, Colbert paid tribute to Letterman and said that he learned more from him than he did many of his college courses.

“And I gotta tell you, I do not envy whoever they try to put in that chair,” Colbert noted.

And then it was back to business as usual.