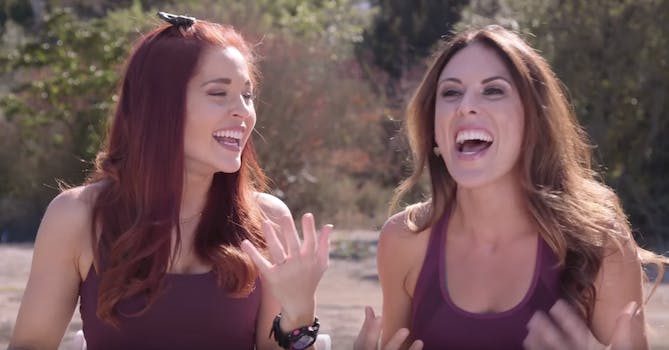 This ‘Amazing Race’ duo opens up about their tumultuous first week

What exactly happened in that cave?

This article contains spoilers for the first episode of this season of The Amazing Race.

Instead of the usual hodgepodge of contestant teams, the 28th season of The Amazing Race is focused solely on digital celebrities all vying for the big win—and for the attention of a new demographic for CBS. ClevverTV hosts Joslyn Davis and Erin Robinson are one of the 11 duos competing for a milion dollars, and they’ve already hit some bumps along the road in the form of a cave and a puzzle challenge. They gave Daily Dot the lowdown on living their Amazing Race dreams, the feeling of giving up editing control to someone else, and almost voluntarily taking a penalty in the first leg.

You were fans of the race before this season. Had you ever tried to be on it before?

Robinson: I have terrible luck, so I just thought that I’d never be able to do a show like the Race. How would they ever find me? It just felt like such a daunting task to get inside CBS to even be seen. We really think it’s such a big honor for us, being such being fans of the show. I never thought I could penetrate CBS to get there, especially being a season full of Internet people.

Davis: This sort of show or experience is so me and so right up my alley. I’ve always dreamt of being on The Amazing Race, but I’ve always been so busy working and building Clevver that I never thought it would happen in my wildest dreams. I watched the episode last week and was like, “Did that really happen?”

All of this season’s contestants make their living online. How did you prepare for taking that much time away from social media?

Robinson: We knew a few months ahead of time that we were definitely up for the show. Then about six to eight weeks before, we knew it was definitely happening. We were coming in on Saturday and pre-shooting content and working around the clock. We didn’t know we were going to able to let our audience know we were going on it. If we’re not on Clevver for a few days, people think we’ve been abducted, so we had a ton of content pre-prepared and ready to go. It was a lot of work; by the time we were done, we were ready to go on the race, ready to get away from the grind.

Did you go into the race with a strategy? Any special preparation?

Robinson: The thing about Joslyn and I is we work together, but we’ve never been around each other in extreme situations. So we did a lot to prepare. We bungee jumped, much to Joslyn’s dismay… We did some tightrope-walking classes; we did archery and hip-hop classes. We did a lot of stuff together to see how we worked under pressure. We knew Joslyn was going to do a dancing challenging if there’s a dancing challenge. I sing, I’ve played flute for five years, and so I was going to do a music challenge if there was a music challenge. Joslyn and I have very similar strengths, so one of the things we wanted to do on the race is align ourselves with other teams on the race. Joslyn speaks Spanish, which was a help. I speak Southern, so hopefully with my Southern charm and Joslyn’s Español, we can get through the world together.

You already had some snags in the first episode. You were one of the last teams at the roadblock, and you suggested taking a penalty with another team to initiate a foot race. What happened?

Robinson: As you would expect, a lot of things that happened down there didn’t make it to television. When we were in the cave, I was actually working alongside Kurt [Gibson], which you also didn’t see. We were comparing pieces and saying “Oh, you have duplicates of these; I have duplicates of these.” In the process, I think Kurt accidentally grabbed one of my pieces for my mask that I knew that I had. We had two masks that could have worked, but … [someone] told me the blue mask wouldn’t get approved. I was looking on the ground of the cave for an hour looking for that piece. … It wasn’t that I didn’t want to keep going or couldn’t keep going; it was literally “I don’t have what I need to get out of here. The only way I’m going get out of here is a foot race.” Sheri [LaBrant] had not found her piece, and in my mind maybe she’d lost hers too. At that point it was the best strategy I knew about.

Luckily you didn’t have to resort to the penalty.

Robinson: I went, “Before I do this, let me just try the blue piece. Maybe this blue set works and the other two teams were wrong.” And they were, because when you’re on the race you play this crazy game of telephone. Every time someone tells you something from someone else, the story has changed. That was the big lesson for me: Always try all of your options even if someone tells you it’s not an option. They could be manipulating you, or they could just not know themselves.

You’re safe for this week. What can fans expect in the second episode?

Davis: I’m so excited about this episode. Something really cool that happened is all of us ran into a ton of YouTube fans, and it almost turned into a free VidCon at one point. It’s absolutely awesome. You’ve also seen us running through the mud; I think we all had our Baywatch moment. This is going to be a really entertaining episode. I love the fact that all of the teams are still on the race. You’re just going to get to see more of everyone. We know that people have to get eliminated, but it’s so cool to see their stories.

Robinson: This episode is going to have a ton of energy, and there’s going to be a big surprise. Something happens that no one is going to see coming. I think even some of the people on the show are going to be shocked… It’s probably one of my most anticipated episodes of the season.

After this series, are you looking for more ways to partner with more mainstream media?

Robinson: Joslyn and I have been working in this medium a really long time. We’re really pioneers at the end of the day. I love that we can learn from CBS and how they do things, and networks can learn from digital influencers too. We’re all in the media sphere together. The only way we can all be successful at the end of the day is if we help each other and we work together and make both mediums great. That’s why this this show is so special: You have a great digital cast on a great television show. It’s really the marriage of both worlds.

Is it nerve-wracking not being in control of your own editing, when you’re so used to crafting your own story in media?

Robinson: I think we were aware enough when we were doing it to know what the options were for the edit. So when we got back, I just set myself up for worst-case scenario, thinking about how it could be painted in the worst way. It is a little frustrating, but it’s also exciting. It’s nice to be able to sit back and be talent for once and not be producers.

The season is also very friendly so far, in contrast to other Amazing Race seasons. Will that positive attitude continue, both between teams and within the teams?

Robinson: Everyone is so competitive, and we all want to be the best at what we do. That comes out too. It’s not vicious and malicious. We all want to be better than we could be on the race. We’ll see that unfold in the next couple episodes.

Davis: This is a really interesting season. The whole idea of doing a fully digital and fully influencer cast is fascinating for a lot of reasons. One thing to keep in mind is all of us knew each other before the race—or knew of each other. Already kind of having that relationship and respect for each other and what these people have achieved I think sets [up] a different kind of dynamic between people on the race. That said, you’re not only going to see one note on the race. Fans who like to see a little tussle or drama are going to be happy.

The Amazing Race airs Fridays at 8pm on CBS and online on CBS All Access.