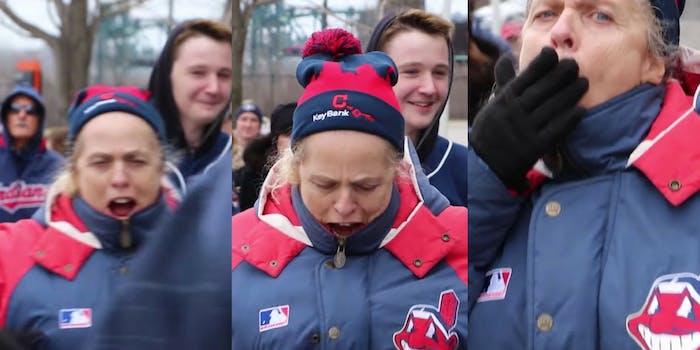 'Get a job,' fans tell Native Americans in the video.

Nothing answers “What’s the big deal?” about a racially stereotyped mascot quite like fans exhibiting racist behavior toward the group the mascot is insulting.

In footage taken prior to a Friday Cleveland Indians game recorded and edited by Cleveland.com, fans did just that as Native American protesters gathered outside Progressive Field, calling for the team to change its name and Chief Wahoo logo. The Cleveland Indians are one of several teams with names and logos that such activist communities say are racist, dehumanizing, and mock indigenous people.

As part of a 25-year tradition, protesters with the Committee of 500 Years of Dignity and Resistance marched around the perimeter of the field, stopping along an adjacent street to chant at fans entering the stadium and holding signs that discouraged the use of the Chief Wahoo logo.

In part so the team will be allowed to host the 2019 MLB All-Star Game, the Cleveland Indians have announced it will “scale back” the use of the logo starting next season. Protesters say it’s not enough, however, and that the logo must be completely discontinued.

This didn’t stop fans from expressing their adoration for the caricature (and their disregard for actual Native American people) during the protest. In one moment in the video, they justify their love for Chief Wahoo and the Indians, and in the next, call Native Americans “fucking Marxist assholes.” Among these insults were “get a fucking job” and “What’s wrong with you people? Get a grip!”

Other disgruntled fans were, admittedly, less brazen in their support for Wahoo, uttering praise for the cartoon to themselves as they walked by the camera. But a majority are seen chanting for Wahoo and the Indians, their arms pumping wildly as they yell across the barricades to the protesters.

One woman goes so far as to “whoop” in excitement before displaying an offensive mockery of Native American behavior, patting her hand over her mouth while emitting another “whooo”-ing noise before grinning to herself as she walks away.

Watch the entire display below: