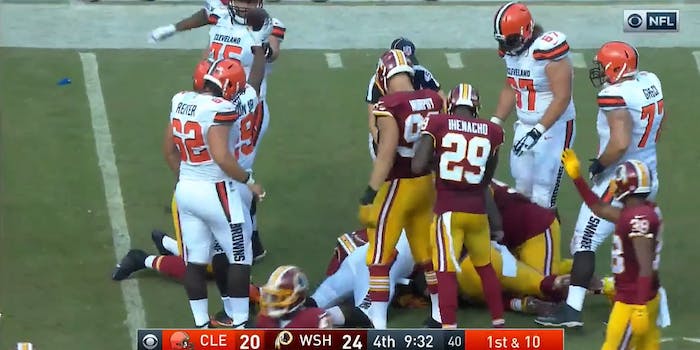 People are going bonkers over this NFL fumble

What do the replays show?

In the fourth quarter of the Browns-Redskins game, the Brown’s appeared to recover a fumble, only to have the refs rule otherwise. And some fans believe the NFL may have it in for the team.

The Browns were down 20-24 and were in the midst of an offensive drive when running back Duke Johnson lost the ball. A scuffle for the ball ensued, and while Johnson ended up getting the ball back, the referees ruled in favor of Washington, which would eventually score another touchdown to win the game 31-20.

Viewers couldn’t believe it, as they replayed it, stopped the video at certain points to examine evidence, and watched it in slow-motion. And upon reexamination, they’re left wondering if it was a bad call made by the refs or if it’s part of a bigger conspiracy (one that’s still churning online Monday morning) to ensure the Browns lose. (At the very least, NFL referees have made a number of botched calls in recent years.)

As is the case with all turnovers, the play was reviewed immediately after it happened. While the fumble itself wasn’t questioned—Johnson did fumble the ball—the replays were to see which team had the ball. According to line judge Sarah Thomas, a Washington player had the ball before Johnson got it back—and NFL’s Michael Signora said that footage didn’t have anything definitive enough to stop the game.

“The on-field ruling was a fumble, recovered by Washington,” Signora told ESPN. “It was confirmed as a fumble in instant replay without the need to stop the game. As to the recovery, several different angles were looked at, but with nothing definitive shown, there was no need to stop the game because the on-field ruling that awarded possession to Washington would have stood.”

Fans may not be happy about the ruling, but the Browns are focusing more on what contributed to the loss than primarily the call itself.

“Obviously, it was a huge point in the game,” said Browns coach Hue Jackson. “But hey, they called it. We can’t let the ball out. We just can’t turn it over. It’s unfortunate we put the officials even in that spot. We should be holding on to the ball.”