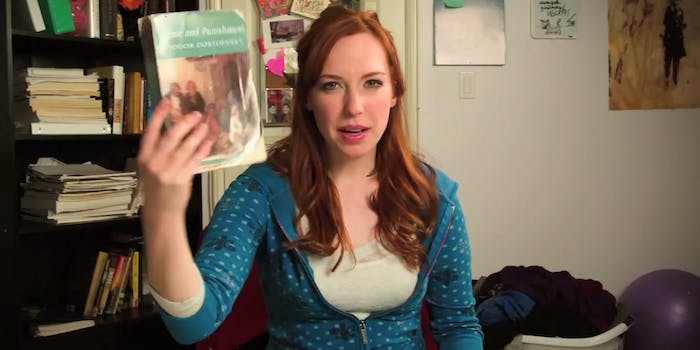 Could you live your life like your favorite book?

What if you tried to live your life according to classic literature you’ve never read before? Just how long until you find yourself at a tragic impasse? That’s the question the YouTube transmedia series Classic Alice tackles as it returns with a second season today.

The project is the brainchild of Kate Hackett, who plays the titular character in the series. It follows in the footsteps of other successful literary-minded YouTube series like The New Adventures of Peter and Wendy or Pemberley Digital’s The Lizzie Bennet Diaries and Emma Approved. However, instead of embodying classic characters with a modern twist, Alice is just a normal girl taking her life lessons from classic books she’s yet to read, with somewhat disastrous results.

The series chronicles college student Alice Rackham, who, having just received a bad grade on an essay, is enlisted by her best friend, Andrew Prichard to be the subject of his vlog-style documentary for school. Alice’s “bad grade” is actually a B-, and her professor’s main critique is that Alice doesn’t connect with classic literature beyond analysis. To prove her professor wrong, she decides to live her life according to classic novels she hasn’t read yet.

Her first choice is Crime and Punishment, but overachiever Alice’s low-grade scheme of stealing nail polish gets elevated by Andrew, who prods her from behind the camera to do something more daring: steal an upcoming exam for the good of all the students in their class. The first season documents Alice’s preparation and execution of the theft, as well as the eventual tension that choice creates between her and the people in her life.

The first season of the series wrapped up in April and left viewers on a bit of a cliffhanger about how Alice and Andrew will reconcile their issues over the first book and move on with the project. In the new, Kickstarter-funded season, the series will tackle George Bernard Shaw’s Pygmalion. The title is ripe for Andrew and Alice’s dynamic, but also leaves us wondering if Alice will shape her own pet project in the new season.