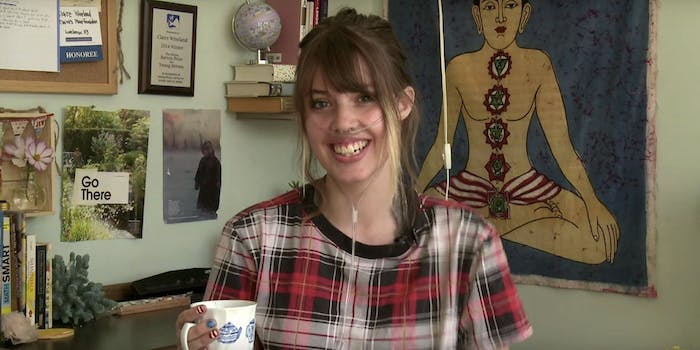 Cystic Fibrosis, YouTube, and me: Claire Wineland is this week’s WCW

Claire Wineland was never expected to celebrate her 18th birthday—or even her fifth, for that matter—but after watching just a minute of her channel The Clairity Project, it’s clear that Wineland is in no way going to let these expectations change the way she approaches life.

Born with cystic fibrosis, a genetic disorder that causes excessive fluid build-up in the lungs and other organs, Wineland has spent a third of her life in the hospital and already undergone 30 surgeries. But Wineland is about the last thing you’d think of when you hear the words “sick person.” In fact, her mission on YouTube and beyond is to create content that breaks down barriers surrounding the ways we approach chronic illness.

This September, Wineland celebrated her first anniversary on YouTube; in that time, she’s tallied over 1.1 million video views. Her growing channel and television reviews of Fox’s Red Band Society even landed her the opportunity to guest star on the show. In her videos like “Tips for Interacting With a Sick Person” and “Most Common Questions I’m Asked,” Wineland provides answers to questions people are typically too afraid to ask. She has also released some lifestyle vlogs, including “My Favorite Books” and “Dear Me: What I Would Say to My Younger Self,” in which she shows through example that having an illness doesn’t have to stop you from really living.

Her videos are poignant and personal, often articulating conversations about life expectancy, social interaction, and dealing with CF in a way that shows Wineland is wise beyond her years.

I’m so incredibly taken with Wineland, from her unceasing enthusiasm to her example of being present in life’s big and small moments. Her work not only inspires audiences, but also teaches individuals to better respect and approach others’ differences.

Claire, thank you for sharing your life with us on YouTube and working to change how society isolates chronic illness. We are all better for having watched you.

Screengrab via The Clarity Project/YouTube