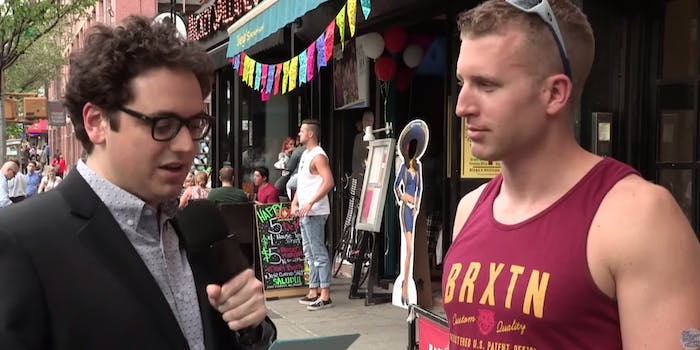 Do you have a good answer to Jimmy Fallon's Big Question about Cinco de Mayo?

Late-night talk shows love to ask random people stupid questions, and it looks like Jimmy Fallon is trying to steal Jimmy Kimmel‘s fake-Q&A thunder. Fallon’s latest segment involves what may be the stupidest question of them all.

The Tonight Show sent a camera crew out to ask Cinco de Mayo party-goers one Big Question about the holiday. But instead of trying to catch people in their ignorance like Jimmy Kimmel’s most popular segments, Fallon’s correspondent just kept rambling on and on without ever getting to the question.

It’s impressive how long people will stand there in the middle of a street party, waiting for a Big Question that never arrives.

We’re amazed anyone lasted this long.