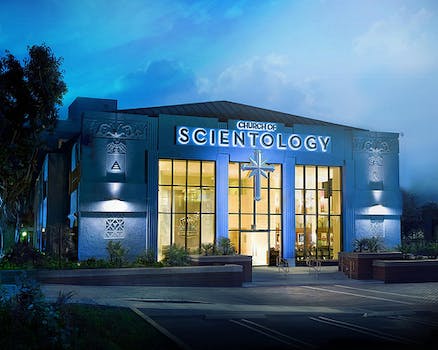 In the new documentary Going Clear: Scientology and the Prison of Belief, HBO is confident that it has the next Blackfish on deck. But officials in the Church of Scientology say it’s the next Rolling Stone/UVA rape story.

On Friday, the church began a major media blitz—including full-page ad buys in the New York Times and other major publications—denouncing the film’s director and producers for alleged lapses in journalism ethics. The ads from the notoriously defensive and litigious church come just nine days before the documentary is set to debut at the Sundance Film Festival.

Going Clear is based on a 2013 book of the same name. Written by Lawrence Wright, who serves as producer on the documentary, the book is a thorough and scathing takedown of the church and it’s founder, science fiction writer L. Ron Hubbard. Based heavily on interviews from former church members, the New York Review of Books called the book “a true horror story” upon its release.

The contents of the film itself have been closely guarded during two years of production and the church has not even seen it yet. Still, that didn’t keep Scientology spokespeople from going on the defensive Friday. In the full page ad, the church directly compared director Alex Gibney’s film to a now infamous Rolling Stone article from last year detailing an alleged gang rape at the University of Virginia that was found to be rife with inaccuracies.

Among their complaints, church leaders say that they were never given an opportunity to respond to allegations made in the film. The ad claims that Gibney and HBO, which produced the documentary, refused 12 times the church’s request for information about what assertions or claims will be made in the film. It also says that Gibney and HBO “rejected multiple requests to meet with executives of the church.”

However, Gibney tells the New York Times that he “requested interviews with various people – including current church members and officials – who could shed light on specific incidents discussed in the film.” However, Gibney said those asked either would not comment or “set unreasonable conditions” for the interviews. HBO said those who were approached to be in the film but declined will be noted in the film.

With no specific knowledge of the film’s claims, much of the church’s ad focuses on discrediting the book upon which it’s based. In the book, Wright interviewed dozens of former Scientologists who say the church is a financial scam that regularly subjects its members to physical and psychological abuses while catering to its leadership and elite members. However, the church attacks the credibility of these sources, saying many of them left the church decades ago and have no first-hand knowledge of the the church’s actions in recent years. In its ad, the church also levels unspecified claims of perjury and obstruction of justice against many of the sources.

Church officials say it’s unfair they haven’t been given a chance to respond to the film prior to its release. But that’s reportedly to keep the church from legally blocking the release of the film. The film is currently under legal review ahead of the Sundance premiere.

Though church leaders tell reporters they have no intention of preventing the film’s release, Scientology does have a long history of taking legal action against those who attempt to damage the church’s reputation. The church famously sued Time in 1991 over a cover story that called the religion a “Thriving Cult of Greed and Power.” The church claimed defamation and sued the magazine and its parent company for more than $400 million. A five-year legal battle ultimately ended with the case being dismissed.

But legal action is not the only recourse the church takes when it feels under attack. In 2011, former Scientology executive-turned-critic, Marty Rathbun, told the Village Voice that the church spent years trying to dig up dirt on South Park creators Trey Parker and Matt Stone in retaliation for the infamous 2005 episode “Trapped in the Closet” which ruthlessly mocked the religion.

“Phone records. Bank records. Personal letters that expose some kind of vulnerability. They’ll read stuff into the kind of alcohol you’re drinking and how much. Prescriptions. They’ll figure out your diet. They can find out a lot about you through your trash,” Rathbun said, detailing the church’s response. Rathbun himself is set to appear in the HBO documentary.

But if the ads printed on Friday are meant as a warning shot, Gibney does not appear to be heeding them. Instead, he sent out a rather defiant tweet.

Going Clear is scheduled to appear in several movie theaters across the country before premiering on HBO on March 16.

Photo via Scientology Media/Flickr (CC BY 2.0)