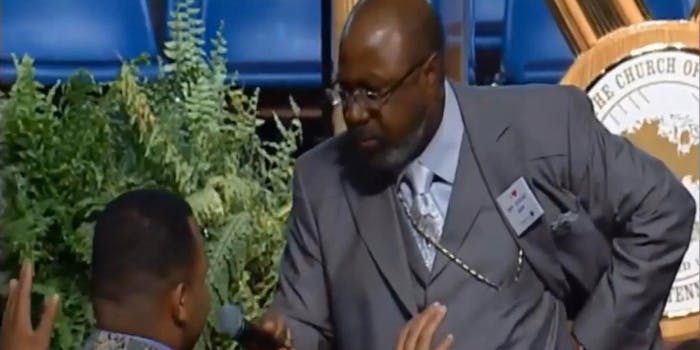 Man claims to be ‘delivered’ from homosexuality in bizarre viral video

Church of God in Christ member claims he's 'prayed the gay away' in viral video.

A video of a young man claiming to have been “delivered” from homosexuality has been circulating YouTube with increasing speed.

The video—filmed at the Church of God in Christ’s 107th Holy Convocation in St. Louis, Mo.—shows the man, who is reportedly 21 years old, declaring to the congregation that he is no longer gay. “I’m not gay no more. I am delivered! I don’t like mens no more. I said I like women,” he yelled into the microphone. “I’m not gay! I would not date a man! I would not carry a purse! I would not put on make-up! I will, I will love a women.” Soon after, several members of the church joined the man to dance and celebrate.

Later in the video, Bishop Brandon Porter rewarded the young man with $100, telling him “God said he’s going to bless you because of your commitment. Just to prove it, He just told me to give you $100. He says money is coming your way because of your newfound commitment.”

Prayer has long been promoted as one of the so-called “cures” for homosexuality and “pray the gay away” ministries, religious camps, and therapists have thrived on this belief.

The original video, which was presumably uploaded by a member of the church, contained the description, “A young man received deliverance from the spirit of homosexuality during the Saturday night altar call after Supt. Earl Carter preached the fire down from heaven.” It had been viewed more than 300,000 times by Tuesday before being removed from YouTube, however several users have uploaded copies of the video and those too have garnered hundreds of thousands of views.

Reactions to the video have varied between praise, ridicule, and sadness. Charing Ball of Madame Noire is of the latter, commenting, “If this was some sort of parody video of what we know happens in church, then by all means, let’s have ourselves some hearty chuckles. But this is real life, and this really happened. And worse, it also means that there are children not only being indoctrinated with this level of unnecessary hate, but certain grown folks with long roots within the church being oppressed by this as well. Quite frankly, that scares the crap out of me. And it is also very weird.”

Since its posting, remixes of the original video have popped up all over Vine and YouTube, including this funky musical reimagining.