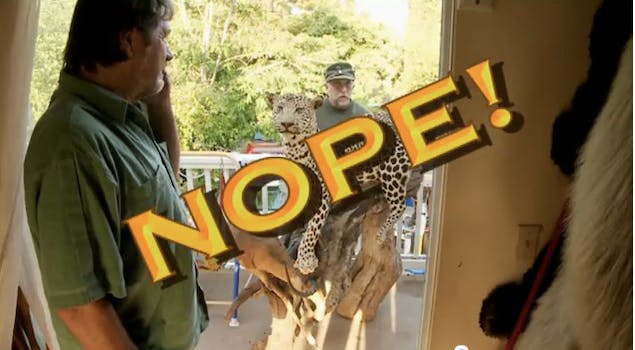 Even if you're not interested in stuffed dead animals, you'll love this commercial hit.

The owner of a small taxidermy shop in southern California said he’s “shocked” after his company’s TV commercial became a huge hit.

The commercial, a hilarious come-on for Testa’s Ojai Valley Taxidermy business was posted on YouTube where it has collected more than 717,000 views, most of which came in the last few days. An appearance on social news site Reddit pushed it over the top.

It didn’t hurt that the commercial was made by viral-video artists Rhett and Link, known as the Commercial Kings on IFC. Despite making it to the big world of cable, they haven’t lost their YouTube touch.

“I think it’s pretty funny,” Testa said in an interview with the Daily Dot. “It’s like a compliment. It’s a positive thing. I never expected that. You don’t aspire to be famous. At least, I didn’t. I love to do what I do.”

Testa was approached by Rhett and Link this summer to shoot an intentionally bizarre, but very real, TV commercial promoting his 24-year-old business in Ojai, Calif.

“I didn’t know what to expect, at first. Then when I met the guys, it was just really funny,” Testa said. “They’re pretty creative. All that stuff, they thought up.”

And all that stuff is exactly what Reddit fell in love with.

In the last 24 hours, at least nine different Chuck Testa inspired meme’s have flooded the site. The meme’s feature Testa’s image (Bin Laden, Chronicles of Narnia: The Lion, the Witch and the Wardrobe, Jesus) and have collected thousands of comments, combined.

Testa even earned himself an entry on Know Your Meme.

“I love it when a meme is so fresh that it makes me laugh every single time,” wrote IllegalD on Reddit in response to a Super Mario meme.

“Chuck Testa is the most lifelike dead animal I’ve ever seen,” wrote FANGO about the same meme.

All the attention has inspired Testa and his son-in-law, who manages the website, to create an official Photoshopping competition.

Since the video was posted on YouTube back in August, Testa hasn’t seen much new business. But since the commercial went viral a few days ago, his phone has been ringing non-stop and emails have been pouring in.

“My customers can’t get through now. It’s a good and a bad thing,” Testa said .”It’s quite a shock.”

Testa got interested in taxidermy back in 1981 when he ordered a do-it-yourself kit from the back of a magazine. It cost $9.95 and included instructions on how to stuff and mount a pheasant.

Since then, Testa has stuffed thousands of animals and averages about 20 a month.

Testa hopes to see business pick up following the recent success of the commercial.

“This is giving me new energy, a new lease on life,” Testa said. “Being what I do is not a necessity. Like any art form, it’s a luxury.”