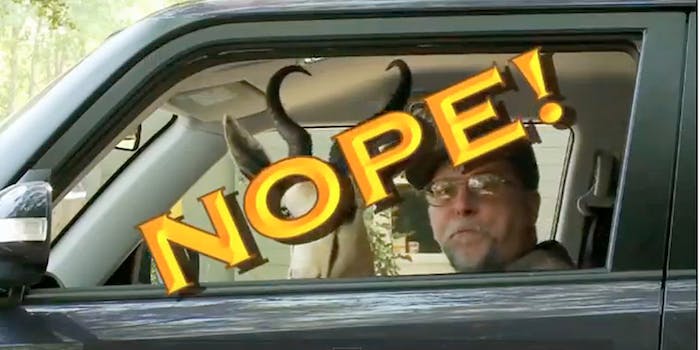 Yep! Rock out to Chuck Testa!

Chuck Testa's now-viral ad for his taxidermy business has been turned into a song. Is it all about live animals you find in weird places? Nope! It's just Chuck Testa.

The wild success of Chuck Testa’s Ojai Valley Taxidermy business commercial on YouTube gave him “new energy, a new lease on life,” he told the Daily Dot this summer.

On Sunday, the Gregory Brothers gave the ad the Songify treatment. The resulting two-minute pop jam has since been viewed nearly 800,000 times.

That’s no surprise given the triple-whammy of YouTube stardom that went into the clip.

The original video was created by Rhett & Link, the viral adverting combo behind IFC television show, Commercial Kings.  The Gregory Brothers, of course, created Auto-Tune the News and re-created both “The Bed Intruder Song” and “The Double Rainbow Song” as well as the sampled chorus of children came from the “Kids React!” series by the Fine Bros.

We’re pretty sure that Testa, 55, would approve his unintentional pop stardom.

“It’s like a compliment,” he previously told the Dot, referring to the popularity of his original commercial. “It’s a positive thing. I never expected that. You don’t aspire to be famous. At least, I didn’t. I love to do what I do.”