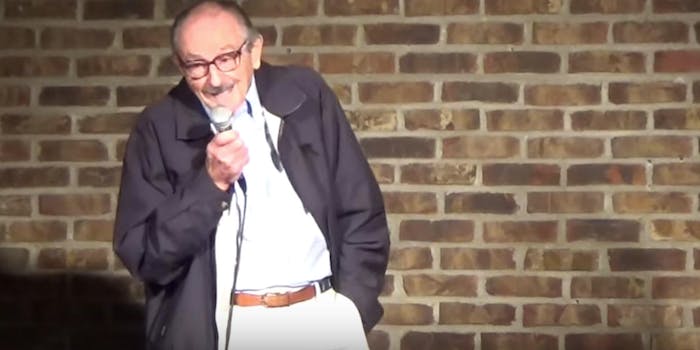 Dad humor is having a moment, but what about granddad humor? Meet Chuck Esterly.

The 89-year-old recently took the stage at Go Bananas Comedy Club in Cincinnati, Ohio, for his very first standup set. If you’ve ever done standup, you know so many elements have to be in place: timing, flow, energy, pacing, confidence. It’s not easy, but Esterly performs like he’s been doing this for years.

The video was uploaded to YouTube by Mark Chalifoux almost a month ago, but since the seven-minute clip hit Reddit yesterday, Esterly’s become a viral star. Chalifoux was one of Esterly’s teachers at a standup comedy class at the Sycamore Senior Center in Cincinnati and told Splitsider he was the only student to actually perform his set in front of an audience:

I’ve seen a lot of open-micers at Go Bananas before, but he was calmer and more collected than all of them and it was a delight to watch him destroy on stage. He really killed it, and totally won over the audience and staff there alike.

As a standup, you write from experience, and Esterly takes us on a real journey: There are jokes about death, amorous widows, penis enlargers, frequent urination. He even has a fan page already.