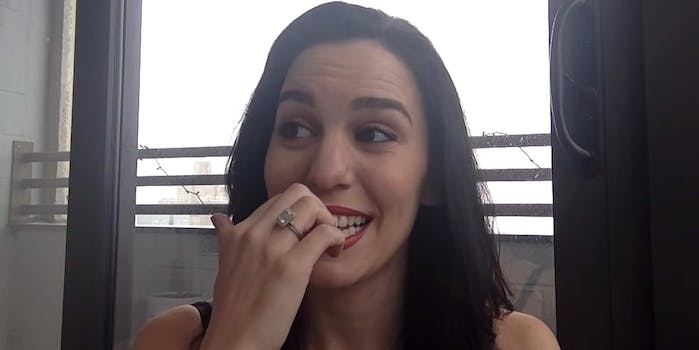 After seeing the movie on opening weekend, the former Disney star became troubled with the franchise’s depiction of consent. “Both the film and the novel blur consent by claiming it’s a grey area, when it’s in fact black and white,” the 30-year-old actress told Us Weekly.

The actress was so confident that America would turn up its nose in disapproval over the film’s consent issues that she made a wager with her husband, Brendan Rooney.

If Fifty Shades got knocked off the box office’s top spot on the weekend following its release, he would stand on the balcony of their New York City apartment in only his boxers. If she was proven wrong and Anastasia Steele reigned supreme, she would take to the elements in revealing lingerie.

Sadly, Christian Grey won the box office during its second week in theaters, which meant Ren Stevens had to pony up. “In protest of this misogynistic and misguided film, I’m going to exercise my right of consent and stand outside,” she told YouTube as she embarked into the arctic cold.

For 60 seconds the actress endured harsh temperatures on the balcony in an outfit that would make Mr. Grey blush, all the while holding a poster which bore the hashtag “#Consent.” Despite freezing temperatures, Romano was a good sport and spent the full minute outside before rushing back in to the warmth and falling flat on her butt.

While her protest was noble, the film shows no sign of slowing down.