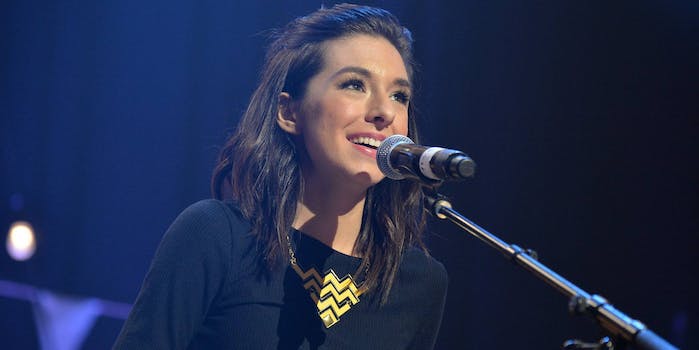 The shooter allegedly may have been an ex-boyfriend.

Singer Christina Grimmie, who is best known as a former finalist on the TV show The Voice, was shot and killed early Saturday morning after performing in Orlando. According to police, the gunman approached Grimmie, shot her, and then shot himself after Grimmie’s brother tackled him. Grimmie was 22.

OPD was told suspect walked toward Christina and shot her. Christina's brother immediately tackled the suspect, who shot & killed himself.

With deep regret, we have confirmed Christina Grimmie, @TheRealGrimmie has died from her injuries.

“Upon arrival officers found the male suspect, who was deceased, and one victim who was gravely injured,” police said in a statement. “That victim, singer Christina Grimmie, was transported to the hospital with critical injuries. She later died from those injuries.”

Fans and supporters have been sharing their condolences across the Internet, including the band Before You Exit, who played with Grimmie in Orlando last night. #RIPChristina has over 1.4 million tweets.

Today we lost an angel, sister, and a beloved friend. #RipChristina pic.twitter.com/EkwTKsaLFr

There are no words. We lost a beautiful soul with an amazing voice. Our hearts go out to the friends, fans and family of @TheRealGrimmie.

I am speechless. I used to watch @TheRealGrimmie's covers on YouTube before she became famous. #RIPChristina

Hard to believe @TheRealGrimmie was taken last night. Only 22 years old. That's too young. My thoughts are with her family. #RIPChristina

Though police have yet to release any information on the identity of the shooter, Steven J. Robinson, a drummer for Selena Gomez and friend of Grimmie’s, claims it was an ex-boyfriend who shot her. The Daily Dot has reached out to Robinson for comment.

Grimmie began her career on YouTube, where she performed both covers and original songs. Her channel has over 3 million followers. In her last video, uploaded last week, she urged followers to support her Charity Champions League for the Humane Society.

Hank Green, internet celebrity and organizer of VidCon, expressed his condolences on Facebook. He also said that he is speaking with the security team for VidCon about increased screening and protection.

According to the Brady Campaign to Prevent Gun Violence, 89 people die every day from gun violence—31 from murders, 55 from suicide. Two days ago, a federal appeals court in California ruled that the Second Amendment, which provides the right to bear arms, does not include carrying a concealed gun.

Update 11:13am CT, Jun. 11: Orlando police have identified the shooter as a 27-year-old male “armed with 2 handguns and a hunting knife.” Police also said he was not from Orlando. They are currently searching for a motive, and have said they will release the shooter’s name in a few hours.

Suspect who shot @TheRealGrimmie is a 27yo WM. He is not local. He was armed with 2 handguns and a hunting knife. pic.twitter.com/fxvfXua7BM

Detectives are looking at his phone and computer and hope to identify a motive. His name will be released in a few hours.

The pinned tweet to Grimmie’s Twitter account has disappeared, but Grimmie’s manager Brian Teefey, has started a GoFundMe account “to assist her family in their time of need.” Nearly a thousand people have donated in the past 14 hours.