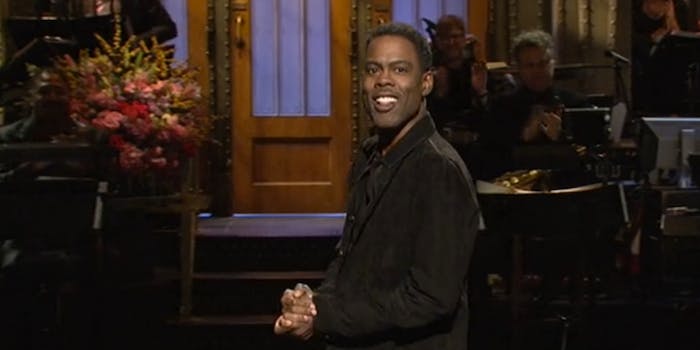 Chris Rock on race, Hollywood, and why a woman needs to host late night

Chris Rock’s recent Saturday Night Live appearance was a bit hit-or-miss, but his opening monologue was perhaps the bit that hit the hardest. Rock’s never been an overtly political comic, but his comments about the opening of One World Trade, gun control, and the Boston Marathon bombing certainly struck a nerve.

In a fantastic interview with Frank Rich for New York magazine, Rock explained why so many people were offended by his comments. When asked about the “political correctness that was thought to be dead,” Rock responded:

Oh, it’s back stronger than ever. I don’t pay that much attention to it. I mean, you don’t want to piss off the people that are paying you, obviously, but otherwise I’ve just been really good at ignoring it. Honestly, it’s not that people were offended by what I said. They get offended by how much fun I appear to be having while saying it. You could literally take everything I said on Saturday night and say it on Meet the Press, and it would be a general debate, and it would go away. But half of it’s because they think they can hurt comedians.

The whole piece is worth reading, but here are eight more of the realest bits from the interview.

On the Internet and how it’s changed how comedians try out material:

It is scary, because the thing about comedians is that you’re the only ones who practice in front of a crowd. Prince doesn’t run a demo on the radio. But in stand-up, the demo gets out. There are a few guys good enough to write a perfect act and get onstage, but everybody else workshops it and workshops it, and it can get real messy. It can get downright offensive. Before everyone had a recording device and was wired like fucking Sammy the Bull, you’d say something that went too far, and you’d go, “Oh, I went too far,” and you would just brush it off. But if you think you don’t have room to make mistakes, it’s going to lead to safer, gooier stand-up. You can’t think the thoughts you want to think if you think you’re being watched.

On Obama’s presidency in its second term:

I’m trying to figure out the right analogy. Everybody wanted Michael Jordan, right? We got Shaq. That’s not a disappointment. You know what I mean? We got Charles Barkley. It’s still a Hall of Fame career. The president should be graded on jobs and peace, and the other stuff is debatable. Do more people have jobs, and is there more peace? I guess there’s a little more peace. Not as much peace as we’d like, but I mean, that’s kind of the gig. I don’t recall anybody leaving on an up. It’s just that kind of job. I mean, the liberals that are against him feel let down because he’s not Bush. And the thing about George Bush is that the kid revolutionized the presidency. How? He was the first president who only served the people who voted for him. He literally operated like a cable network. You know what I mean?

On raising his kids in an Obama presidency:

…but it’s also my kids grew up not only with a black president but with a black secretary of State, a black joint chief of staff, a black attorney general. My children are going to be the first black children in the history of America to actually have the benefit of the doubt of just being moral, intelligent people.

On Apple CEO Tim Cook coming out as gay:

Which I think is actually bigger than the football player. Because the average person in that locker room is in his 20s. And it’s just not a big deal to be around a gay guy—if you’re in your 20s. Whereas Tim Cook is around these corporate guys. That is the epitome of a boys’ club. That is sexist, ­racist—the least inclusive group of people you’re ever going to find. Men who have no problem being called owners. Who actually wants to be called an owner, even if you owned a football team? Just the title owner is just so nasty and disgusting.

On racism in America:

But the thing is, we treat racism in this country like it’s a style that America went through. Like flared legs and lava lamps. Oh, that crazy thing we did. We were hanging black people. We treat it like a fad instead of a disease that eradicates millions of people. You’ve got to get it at a lab, and study it, and see its origins, and see what it’s immune to and what breaks it down.

On dealing with failures in Hollywood:

I’m still on the table, which is good. No one’s yanked me off. You can be behind and on the table. I never take any of it personally. It’s all money, especially when you’re talking about playing a lead of anything. I guess if you’re a supporting character, friendships may come into play here and there — strings can be pulled in the lower echelons. But as far as being a leading man, there’s a printout, and there’s how much the movie made here, here, and here. How do you do in Budapest? How do you do in Calgary? Germany? And they make the decision.

On Hillary Clinton’s run for president:

I mean, I would love to see Hillary, but there’s a part of Hillary that’s like the Democratic McCain at this point. As he showed, “It’s my time” is not really enough. But you know, I’m absolutely ready for a woman president. I’m ready for a woman nighttime-talk-show host, to tell you the truth. I wonder which will be first.

On whether his daughters think he’s funny:

Sometimes. My daughter Lola was like, “Kevin Hart’s funnier than you.”