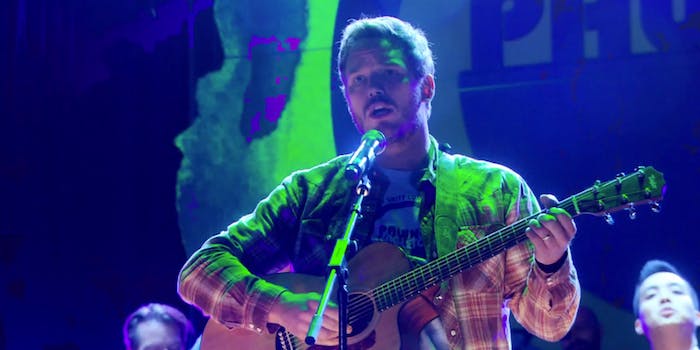 Friday marked the end of an era: the last day of filming for the final season of NBC’s cult hit Parks and Recreation. During the day, the cast and crew took to Twitter for a nostalgic look back at the series and their on-set friendships:

But at the end of the day, the Parks and Rec team was ready to celebrate. Footage that’s surfaced of the wrap-party bash shows Chris Pratt performing a boozy rendition of the show’s tongue-in-cheek eulogy for a miniature horse known as Li’l Sebastian. “5,000 Candles in the Wind (Bye, bye, Li’l Sebastian)” is something of an anthem for Pawnee, the fictional Indiana town where Amy Poehler’s Leslie Knope deals with the quirks and foibles of small-town government.

Pratt’s character, Andy Dwyer, performs the song in the show’s third season finale. As you can see, this time around he’s a little less intelligible, but no less enthusiastic.