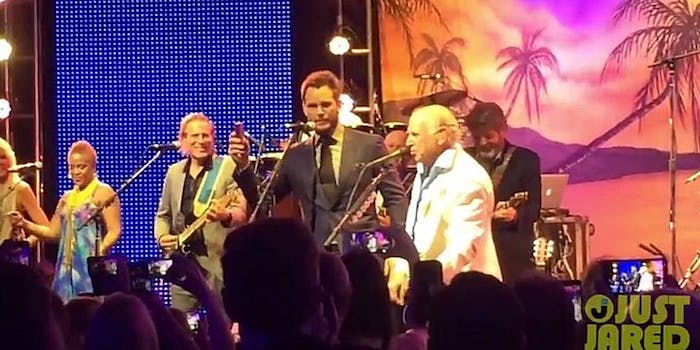 Chris Pratt and Jimmy Buffett hung out and sang ‘Margaritaville’

Jimmy Buffett is right. Chris Pratt probably should stick to the acting game.

While embarking on his extensive media tour touting the new Jurassic World movie, Chris Pratt has managed to lose a dinosaur trivia contest to a little kid bent on complete emasculation and has taught us all a little something about drunk acting.

The natural byproduct of both those—inebriation combined with an ability to be completely humiliated by your choices in life—was given to us in the flesh when Pratt appeared at the film premiere’s afterparty to sing “Margaritaville” with Jimmy Buffett and his Coral Reefer band.

Some clips of the performance from generous Instagram users.

That moment when @prattprattpratt joined #JimmyBuffett on stage at the #JurassicWorldPremiere – making it the coolest event around! #chrispratt #Margaritaville

And if you want the full six-minute experience.

Let’s be honest: It’s not the best performance from Pratt, who had a tendency to talk over a clearly game Buffett, and even more disappointing is the fact that somebody didn’t replace the phone in Pratt’s hand with a lime-infused, frozen drink.

Either way, Buffett had the right idea when he said, with all the sarcasm dripping down the mic stand, “Chris has left the movie business and he’s going to be a rock star. Good luck with that one. Great career move.”