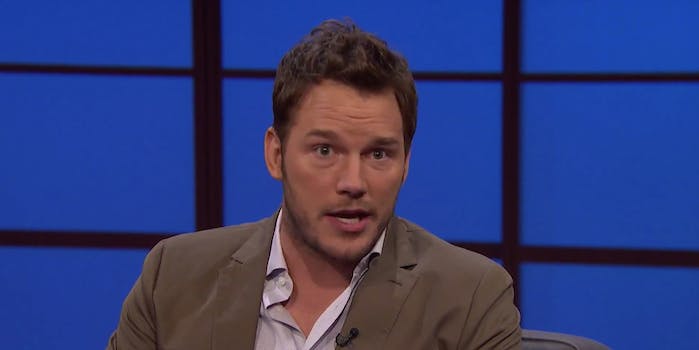 Chris Pratt once flashed Amy Poehler on ‘Parks and Recreation’

The cut made Parks and Rec, but it wasn't without some stern words from NBC.

Guardians of the Galaxy is finally out, but the Chris Pratt press train is still going strong.

The latest stop was Late Night With Seth Meyers, and although he churned out the laughs as usual, when the subject of him getting in trouble with NBC came up, he wanted to remind everyone that it was not a laughing matter—no matter how much everyone ended up laughing.

During an early season of Parks and Recreation, he was supposed to film a scene where his character was naked (but he was wearing nude underwear). But since he wasn’t getting the response he wanted, he decided to take matters into his own hands. And it worked. That cut ultimately made the show, but not without some reprimanding from the network.

While it also served as another reminder that Parks and Recreation is coming to an end, Jurassic World director Colin Trevorrow sees the media blitz as an opportunity to share an image from the film. The Summer of Pratt isn’t ending. Rather, it’s coming back in full force next year.