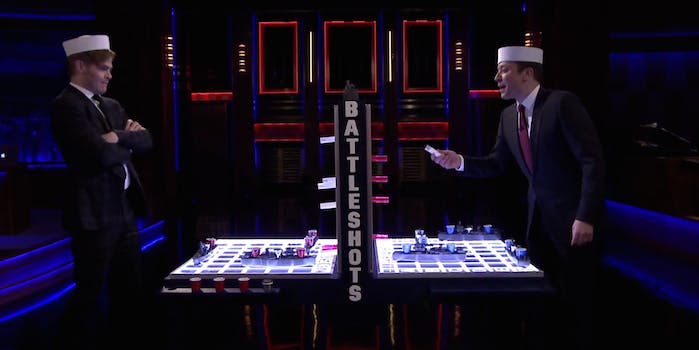 Never has Battleship been so fun.

On Monday’s episode of The Tonight Show, Jimmy Fallon and Chris Pine brought to life a game most often seen at college parties: Battleship. The twist, however, was that in addition to scoring hits on each other’s miniature flotillas, Fallon and Pine also forced each other to take a shot of tequila each time they scored a hit.

“Battleshots” played much like the board game it was based on: Pick a square and learn whether you missed or hit a ship. A hit ship resulted in a shot of alcohol, adding new meaning to the phrase “bomb’s away.”

Between Fallon and Pine, one of them opens up a strong lead and doesn’t look back. But with the punishment and shot in hand at once, is it really losing?