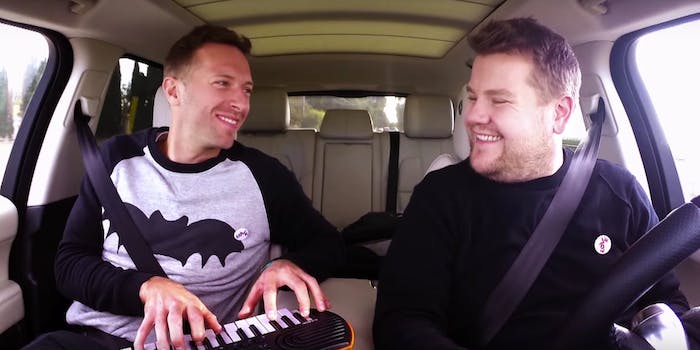 Along the way, they discover what 'American football' really is.

Coldplay’s Chris Martin is that much closer to performing at the Super Bowl halftime show on Sunday, having hitched a ride from James Corden.

Martin is the latest star to join Corden’s Carpool Karaoke, and the two sing some of Coldplay’s greatest hits while they drive north. But in between the belting, we get some insight into what Martin and Corden think “American football” is, as well as a Mick Jagger impression and a small cover of David Bowie’s “Heroes.”

They really start to have fun once Martin brings out a portable keyboard and starts playing some songs, although he really hopes to use it to announce who’s winning during the game. Even though Coldplay is a divisive choice for the Super Bowl halftime show among music fans, Martin may end up being a more entertaining commentator than the people we’ll be watching call the game on Sunday.