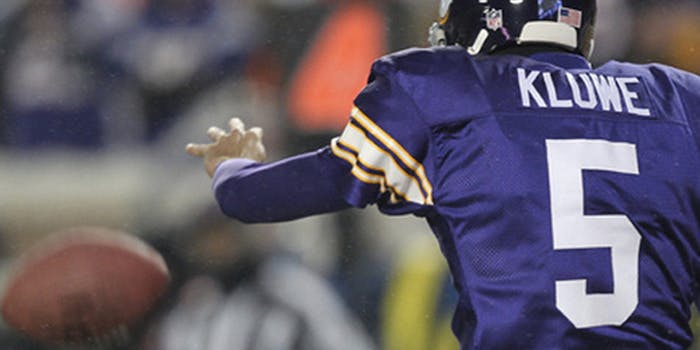 Chris Kluwe is the starting punter for the Minnesota Vikings. But he’s perhaps better known online as Loate, a username that’s tied to his Reddit and World of Warcraft accounts. In other words, he’s a geek in football pads.

Holding degrees from UCLA in history and political science, Kluwe is truly a rarity in the NFL. His experience dealing with trolls (both playing them in MMORPGs and deflecting them in other online communities) have given him a unique public persona, unafraid to speak out on critical issues and to do with the power of the profane.

Kluwe has become a vocal, and entertaining, proponent of gay marriage, with an amendment to ban it on the slate for Minnesota this year. His funny, eloquent, and edgy take-down of Maryland State Representative Emmett Burns, Jr., who had pressured the Baltimore Ravens to forbid their players, including Brendon Ayandabeyo, from discussing marriage equality, blew up when Deadspin published it.

He is also a writer with his own blog, Out of Bounds, in Minneapolis’s Twin Cities/Pioneer Press. His response there to his former teammate, and current Baltimore Ravens center, Matt Birk intensified the public attention on the Kluwe.

The Daily Dot talked with Kluwe about online communities, the NFL, and the gay rights, and about where and how those communities intersect.

Daily Dot: You’re pretty well known in the geek community for being heavily invested online outside of your role as a football player. What are your favorite tools, toys and communities online?

For sheer social media, Twitter. I love Reddit for interacting with the NFL fanbase. I’m very active on r/nfl. For gaming, the WoW Realm Forum. But I’ll be on a board for a year or two and wander off, come back a year or two later. I’m kind of an Internet vagabond.

DD: What are your experiences in the WoW community and in the Reddit community? What is attractive about them to you?

It’s the free-flowing discussion. You can talk with anyone and anything goes. Well, if you go to 4chan it’s different than if you go to the Politico forums. But I grew up with online gaming and message boards were the way to communicate with people outside the game, people who generally share the same interest as you. One of the appeals of online gaming is that people of very different types have a reason and a means to get together.

DD: How often do people in those communities realize you’re a pro athlete? When it happens are you treated differently?

For the first few months of gaming on a new site, I don’t say who I am. I just go by my character name, Loate. I like to name my characters the same in each game for the sake of continuity, but it’s a clue and people like to figure it out. People will say, “Oh, he’s the punter for the Vikings!” But, a few days later, “Oh, he’s just Loate.” I’m not there as a football player. I’m there to play the game, and it’s all about how well I play the game in front of me. It’s not about my job.

DD: Do you think Internet culture is more pro-gay rights than America at large?

From my experience internet culture is less pro-gay rights, especially the gaming community. You have to remember the people on those communities tend to be 16-28-year-old guys. Just look at a typical Call of Duty or Halo death match to see the truth of that. The anonymity allows it.

DD: What about the NFL community, the players and fans?

People think, you’re part of that NFL macho football locker room culture! Well, I want to show you can be that and you can also be a gamer and not be discriminatory toward others. The culture in the NFL, and in sports in general, is changing. It’s become a bit more accepting. Sports is one of the last barriers. If sports starts accepting (gay marriage), if the athletes endorse a position, the rest of society tends to follow along.

We have a platform to influence what people regard as acceptable. We should use that, rather than perpetuate the stereotype of the dumb jock who beats up gay kids. The culture has changed a lot. When I was a rookie, the eight to nine-year vets were mostly close-minded. Now I’m an eight-year vet and rookies now have a different attitude. A lot of it has to do with the Internet: You can go online and see all these cultures. It’s cool to be able to go on the Internet and know your way around. My generation is the front-runners of that. As the old generation dies out, it will be the geeks who inherit the earth.

DD: Do you get trolled either due to your job or your stance on marriage equality?

I learned a long time ago not to take anything on the Internet seriously. Gaming boards taught me to develop a thick skin. I kind of like to deal with trolls. It’s another kind of a challenge. I can play that game. My thought is if you’re going to do anything, do it to the best of your abilities. If i’m going to do something, I’m all in, including dealing with trolls. That’s the way I’m wired.

DD: There have been a lot of false starts as pro sports management have tried to figure out first how to stop or limit and now, to some degree, manage player-fan interaction via social media. What does the future of the player-management-Web-press-fan relationship look like to you?

It’s going to be similar to the way it is now. Teams and organizations educate guys, provide them with a set of guidelines, what you should be doing online, what you shouldn’t. When younger guys ask me, I tell them, whatever you put on the Internet is out there forever. Before you post read it over two or three times, because once you do it, that’s it. It’s there forever. The NFL takes this stuff very seriously. Every year we get a lecture on social media and traditional media. They want to teach the guys what they might not otherwise realize, what you could get away with before, you can’t now.

DD: You have a unique writing style. Examples include your letter in Deadspin to Emmett Burns and your post in the Pioneer Press’s Out of Bounds blog in response to Matt Birk. There is a journalistic precision to your arguments, but these pieces also have a kind of snarky color commentary, a combination that might seem unusual to some. Is the combination of your experience online and your education responsible to some degree for the development of that style?

I know where it’s from: It’s from the WoW Realm forum boards. That’s where I learned to control how I communicated very successfully. On a board, if you want to be heard, make people remember you, you have to find your argument and then throw in some hopefully hilarious profanity, which gives them a way in to the rest of the letter. It’s a very almost anarchic world, you have to be quick on your toes if you want to thrive. It’s a fiery crucible to hone your arguing.

DD: When will we see a current, high-profile player come out of the closet? Either in the NFL, NHL, NBA or MLB?

There are other people supporting marriage equality in the NFL: Connor Barwin, Scott Fujita. I’m a newcomer to the party. As younger generations keep cycling through the NFL, they realize it isn’t a big deal who you marry. For me, I don’t understand how people can care who someone loves.

We are hopefully close to seeing someone come out in one of the four major sports. More and more people are starting to realize your sexuality has no bearing on what you do in the NFL—or in life. It’s just who you are. In boxing, Orlando Cruz has come out. This is a guy who kicks ass for a living. You can’t maintain being gay means you can’t do the job anymore.

Photos by Freedom to Marry/Flickr