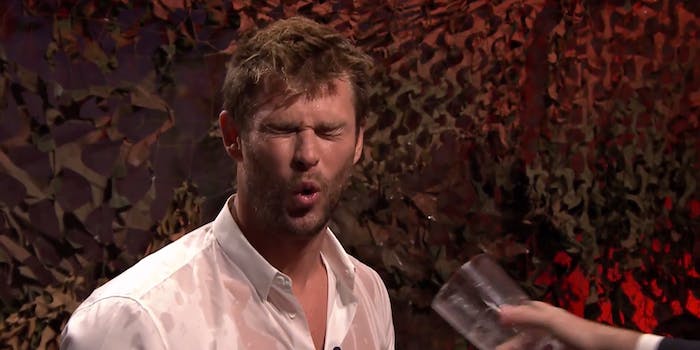 Chris Hemsworth showed up in good spirits and for that he got soaked.

Hemsworth was game for a round of Water War with Jimmy Fallon and all it entailed. A simple card game might not make for good TV, but being able to pour water on someone’s head (or in Fallon’s case, Hemsworth’s crotch) certainly will.

Was this whole thing set up just so that the audience (and the YouTube viewers) could see Hemsworth in a wet white shirt? Maybe. Regardless, he hams it up for the camera and is a fantastic sport for the whole thing, from first flip to the final annihilation with a super soaker. He knows the audience will go nuts for it.

He might no longer have Thor’s signature long locks of hair, but he does know a thing or two about being drenched in water.