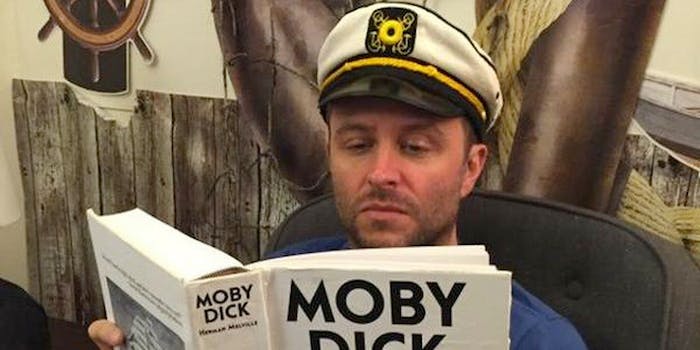 Chris Hardwick and ‘@midnight’ host a #MobyDickathon on Periscope

For almost 24 hours now, Chris Hardwick and friends of his show @midnight have been taking shifts reading the entirety of Moby Dick live on Periscope.

According to the show’s Twitter, the livestream is a celebration of the novel’s publication anniversary. And, you know, just to see if they can do it.

VERY SOON we attempt to read ALL of Moby Dick on Periscope. Pals will stop by to help. CAN WE DO IT? #MobyDickathon pic.twitter.com/8nQU3ugANo

So far, Hardwick has had the show’s regular guest comedians and writers tap in as readers—there have been appearances from Morgan Murphy, Dan Soder, Sara Schaefer, Steve Agee, Nate Corddry, and Emmy Blotnick, to name a few—but the stream is still underway, so there’s no telling who might show up next.

LIVE on #Periscope: #MobyDickathon part 24! Is this the home stretch? We hope. https://t.co/0LdCVecmpS