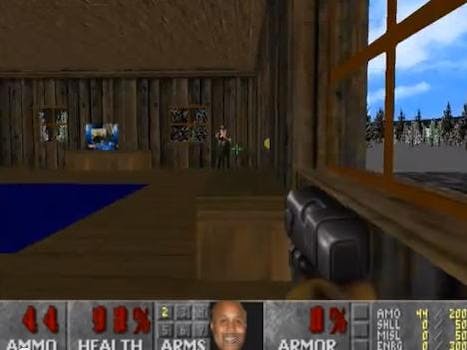 The saga of Chris Dorner, a former LAPD officer turned murderer and fugitive, has been compared to video games like Call of Duty. Now, thanks to 4chan, it actually is a game.

The saga of Chris Dorner, a former LAPD officer turned murderer and fugitive, has been compared to video games like Call of Duty.

Now one 4chan user has turned the comparison into a reality.

The free Doom–inspired game “Chris Dorner Last Stand” allows users to play as Dorner as he is holed up in a cabin in the woods.

While the song “N***a N***a N***a” by Gangsta Rap plays in the background, you must protect the cabin from police officers trying to get in. At one point in the game a photo of actor Charlie Sheen appears on a wall to lend some advice to the fugitive.

“Christopher Dorner, this is Charlie Sheen. You mention me in your manifesto so thank you for your kind words,” Sheen says. “Let’s figure out together how to end this thing. Call me. I look forward to talking to you.”

As the game progresses, more and more cops swarm the cabin before it is set on fire somehow. Near the very end of the video demo, a person resembling the Terminator appears outside the cabin and kills Dorner.

The game and YouTube video were created by Tenentr00Anderson. The video has collected 104,000 views in the past 24 hours.

“PS: Yes, you can win this game. The boss is hard, takes around 100 shots to kill, but you can if you have a good enough strategy,” Tenentr00Anderson wrote in the video description. “4chan can make better games in 10 hours than EA can make in a year.”

The game is based off the events that transpired Tuesday in a cabin near Big Bear Lake, Calif., where police eventually traced and exchanged gunfire with the fugitive ex-cop. One officer was killed and one was wounded. The cabin caught fire, and Dorner never emerged.

Dorner had been on the run from police since Feb. 3 after he killed four people, including one police officer.

The game has been a hit on Reddit, where it has collected more than 200 comments.

“I’ve been playing this all night. After you beat the first level, it goes on to the rest of the levels in FreeDoom, keeping the skins and modifications,” w00tmang commented. “The game quickly became about how the LAPD enslaved humanity with the help of aliens, and Dorner is the only hope humanity has in defeating the evil LAPD.”