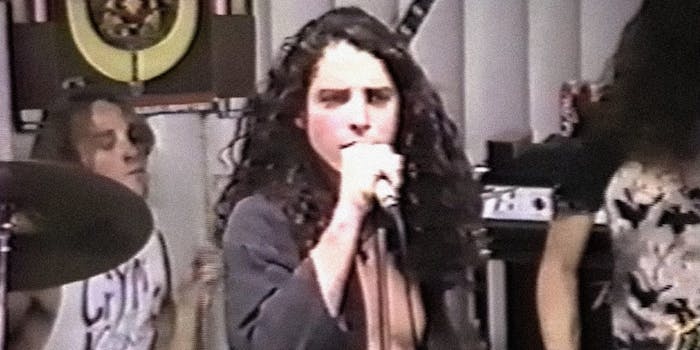 In 1989, Chris Cornell was already a rock god—and here’s the proof

Chris Cornell died late Wednesday in Detroit following a concert. The news was a crushing blow to rock fans around the world who knew him as the kind of tsunami-stirring screamer who sang with staggering range and power. He was 52 years old.

Cornell fronted Soundgarden, a beloved grunge band that had reconciled in recent years and returned to its shredding form onstage. Back in 1989, the band was less polished and still finding its way—but it already had its voice. In a 30-minute VHS concert film uploaded and tipped to Spin magazine on Wednesday, a young Cornell is already an effortless star.

The gig takes place at Rhino Records in Los Angeles on Sept. 24, 1989—just weeks after sophomore LP Louder Than Love hit stores. It’d be the first Soundgarden record to land on the Billboard charts, and it set the table for 1991’s twice-platinum Badmotorfinger. At the time, Nirvana alum Jason Everman was in the band, he’s the dude on bass.

It’s loud and sludgy, but Cornell is already a frontman for the pantheon. Watch for yourself: