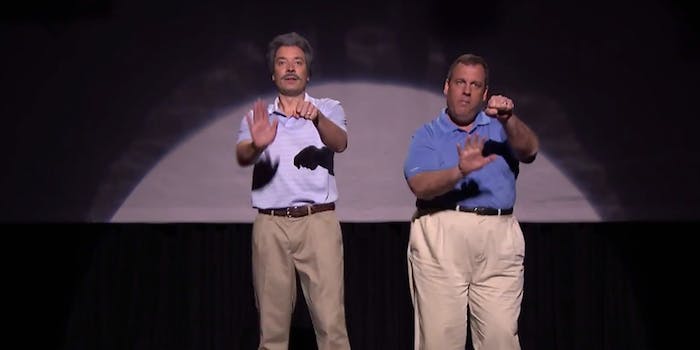 It's the next level of embarrassing parental dancing.

New Jersey Gov. Chris Christie is almost always the butt of the joke on late-night TV, but at least this time he was also in on it.

A state legislative committee and federal prosecutors are still investigating his role in the closing of lanes on the George Washington Bridge in Fort Lee, but the governor’s appearance on The Tonight Show might be a sign that he’s trying to move beyond the scandal that’s plagued his second term thus far.

He joined Jimmy Fallon onstage for another page of his “Evolution of Dancing” series, and while Fallon’s already covered hip-hop and mom dancing, he’s hadn’t touched one of the more embarrassing types of dancing until now: dad dancing.

The two fathers grabbed their belts and put on their dancing shoes in time for Father’s Day to demonstrate that there is an art to pushing down the garbage and honking the horn. It’s a bunch of lighthearted fun, which is all you can really expect from a Fallon sketch.

Just don’t try to pull the “this bridge is closed” dance.