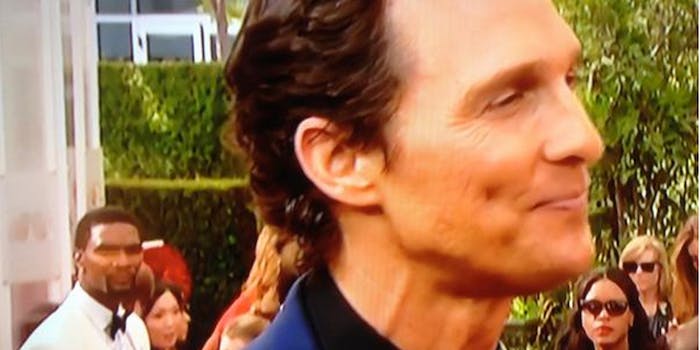 Chris Bosh becomes a photobombing legend at the Emmys

This one was pure art.

Chris Bosh is a nine-time all-star and two-time NBA champion who’s averaged 19.2 points-per-game through his 11 seasons in the NBA, but the skill he’s perhaps best known for these days is photobombing people. In fact, you could say he’s rather unrivaled.

This is something that’s been going on for years. Since Bosh first bombed his more famous friend and former teammate Lebron James during a 2012 playoff game against the New York Knicks, his stuff’s become that of Internet legend. He has slideshows, compilation videos, and his own Memebase page.

Last night at the Emmy’s, however, Bosh ended up outdoing himself completely.

Dressed in a white tuxedo outside on the red carpet, the forward somehow found his way into the focus of a camera transfixed on Matthew McConaughey.

Dude looks like something out of the secret service.

It’s only a matter of time before the Internet hivemind takes control of this one. In fact, we can see the Tumblr now. ChrisBoshinHistoricalPlaces. Someone get it going.