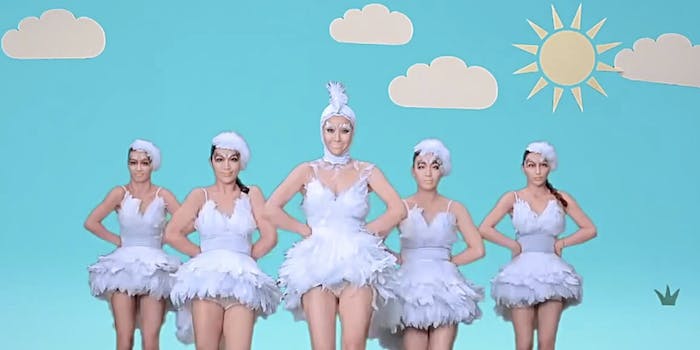 Even if you don't know what this video is saying, it's going to get stuck in your head.

If you thought “Gangnam Style” was an annoying musical trend, just wait until everyone you know is making chicken noises.

Chinese pop star Wang Rong Rollin released what might be 2014’s answer to Psy’s big hit with “Chick Chick.” The song only repeats a handful of distinct words, all in Mandarin, while Rollin otherwise makes farm animal sounds to fill the time.

Stylistically, the video is a mix of Lady Gaga costuming, Ylvis’ nonsensical lyrics, animation, Psy dance moves, and shirtless men in animal masks if you watch long enough. The video has amassed over 5 million views without major Western attention, so we’re pretty confident in crowning Rollin the queen of the barnyard for 2014.