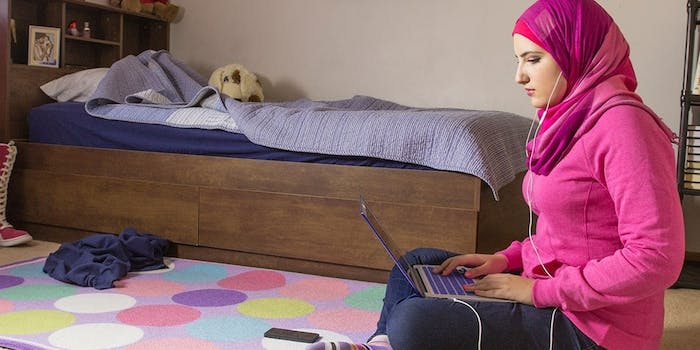 This young girl is leading a revolution—via YouTube, 6,000 miles from home

As a 22-year-old still living at home with her family in Chicago, college student Ala’a Basatneh doesn’t seem like a typical revolutionary.

As a 22-year-old still living at home with her family in Chicago, college student Ala’a Basatneh doesn’t seem like a typical revolutionary.

Born in Syria, Basatneh moved to the U.S. at a young age and grew up as an ordinary suburban teenager. But after hearing about a group of Syrian children being brutally punished for writing anti-government slogans on their school walls, she used Facebook to contact Syrian protesters, joining the revolution from 6,000 miles away.

As the subject of the documentary #chicagoGirl, Basatneh has become one of the public faces of social media activism, using YouTube and Facebook to help citizen journalists spread the word of their fight against Syrian president Bashar al-Assad’s regime. The film offers an interesting glimpse into how a 19-year-old college freshman went from hanging out at the mall to spending all her free time editing protest footage and translating revolutionary slogans, becoming a key political activist in a country she hadn’t visited in over a decade.

In the U.S., the term “hashtag activism” is usually uttered with a kind of derisive sneer, the implication being that social media can’t be used to effect any kind of “real” change. But in Syria, sites like Twitter and Facebook are an integral part of the revolution.

While the Arab Spring brought down the Tunisian government in 28 days and the Egyptian government in 18, the longevity of Syria’s revolution means that activists find it difficult to retain the interest of the international media. But if an activist can post clear YouTube footage of a protest and make sure that it’s shared on social media, then it’s far more likely to wind up on TV. Part of Basatneh’s job is to help citizen journalists make their work as accessible as possible to what can best be described as overseas audiences.

But as her role became increasingly important, her safety became less secure. Basatneh received death threats and was followed around her home neighborhood in Illinois. For her own safety, she used to be escorted to and from class by campus security.

#chicagoGirl is a film about the real-world impact of social media, in a situation where people are risking their lives to share information online. It’s also a story about idealism and obsession, about a teenage girl who decided to dedicate her life to helping people she has never even met: the polar opposite of the apathetic slacktivist stereotype that we often see characterized by people who aren’t familiar with the power of social media.

Following a screening at the Edinburgh Film Festival, we Skyped with Ala’a Basatneh and #chicagoGirl director Joe Piscatella to talk about the film, the revolution, and how #chicagoGirl has inspired teens and college students across the U.S.

First of all, how did this film come about? Joe, did you specifically set out to make a film about Ala’a, or were you intending to make a broader documentary about social media in the Syrian revolution?

Joe Piscatella: I started out to make a broader documentary about social media and revolution. We had done some talking, had interviews, and I realized I wanted a personal story to illustrate what was going on.

I read a blurb about Ala’a getting death threats on her Facebook wall from the Syrian regime, so I found her and told her about this film. And she finally said to me, “Joe, you’re asking me all the wrong questions.” I thought to myself, you know, “My goodness, I’m the one making the movie, you don’t even know what I’m trying to make.” She said, “Well, I’m helping to coordinate protests in the revolution,” and it sounded too good to be true… But interesting enough that two days later, my producer and I sat with Ala’a and watched her do it.

Ala’a, how did you get involved with the revolution in the first place? In the documentary, you talk about being a typical high school girl in your teens, but it’s clear that quite a transition took place.

Ala’a Basatneh: I decided to help first when I saw the group of children that decided to write “We want to topple the regime” on their school walls. And seeing that they were tortured, I believe one was killed… to me that was not an OK thing to learn about that’s happening in the country where I was born. I decided to reach out for activists, and this is exactly what I told them: “I’m willing to help you with everything and anything I can do for you guys to keep going.”

Could you walk me through a typical day in the life of Ala’a Basatneh? The kind of things you do on social media, and how you balance college with your work as an activist?

Basatneh: It’s really not balanced. I’m on my phone 24/7, on my laptop whenever I can. In my classes, at work, at home, all the time because of the time difference and because of how important it is to keep in contact with the activists on the ground. It’s not that it’s six hours online and then the rest of the time I’m not; it’s that I’m constantly online. When the movie was shot, I would get Skype calls at 4 in the morning from activists in Syria, asking me to translate banners that they would be carrying in their protests, so it can end up on international media, on CNN and BBC.

Could you give me a rundown of the type of ways you use social media, through Google Maps and Twitter and so on?

Basatneh: You know, [Twitter] DMs for a period of time were one of the safest ways to contact activists on the ground because for some reason, they couldn’t crack the codes and get into those messages. Facebook and Skype… I keep in contact with activists about helping coordinate protests, evacuating a group of people from neighborhood A to neighborhood B. That comes along with Google Maps, looking at what neighborhood is the closest, the safest. Contacting the activists in that specific neighborhood, helping the families that don’t normally have a home or are at risk of a strike from the regime.

The documentary ends with you traveling to Syria for the first time since you left as a child. What kind of impact do you think that had on your work back in the U.S., the way you conducted your social media campaign?

Basatneh: I decided to travel to the liberated areas where the regime was not in control, bringing in medications and cameras and tech equipment to help the citizen journalists and ill people on the ground. I felt like I did more than when I sat on a laptop and talked to them, that I actually took that action and went and saw them and sat down with them, experienced what it felt like to have a TNT barrel bomb dropped six buildings away from me. That the risk of actually being there between them overall was like… I felt like I was on a different planet, honestly.

So now that the film has come out, what kind of effect do you think it’s had on your work? Are people at college more aware of you and what you do?

Basatneh: Yeah, as a matter of fact: One of my friends that I knew back in high school stopped me yesterday. She saw the trailer for the documentary, it hasn’t even been screened in Chicago yet, so she’s telling me that she really wants to learn more about Syria.

For me that’s one of the greatest accomplishments of this movie. It’s raising awareness, and it’s opening the eyes of college students and high school students that don’t know what’s going on in Syria. One of the funny messages I got was a friend of mine—I didn’t know him much but we took a history course in college together. When the trailer was out, he sent me a message saying, “Now I know what you’ve been doing all that time on your laptop in history class.” They just looked at me as “that girl on her laptop.”

When you were filming the documentary, were you aware that it was going to have this kind of response from people in their teens and early 20s, or were you just looking to inform people about Ala’a’s work?

Piscatella: What really attracted me to the subject matter was this idea that there were these young people using these tools that so many of us take for granted and just use every day for our own social benefit. They were using them in these very brave ways, to do something very heroic.

When I was making this film, it didn’t dawn on me that it would resonate so much with teenagers and college-age students. It really didn’t cross my mind. But a little anecdote that illustrates that is when we had a screening and afterwards a Q&A with me and Ala’a.

A gentleman who was probably 50 stood up, and I don’t remember his exact question, but the gist of it was, “I think it’s very naive for Ala’a and for you as a filmmaker to think that in the scheme of this Syrian crisis, that Ala’a has made a difference, that she’s really effecting any kind of change. Syria is a very complicated place, things have gotten progressively worse, and I think it’s naive to think that she’s making a difference.”

It was one of those questions where as a director, I’m not even sure where to begin to answer it. But before I could open my mouth, two teenage girls at the back of the theater stood up and they said: “She’s already made a difference. She’s using social media tools that you think are just a novelty, and if you don’t see that she’s helping individual people and that she’s made a difference in their lives, then you’re no longer part of this conversation.”