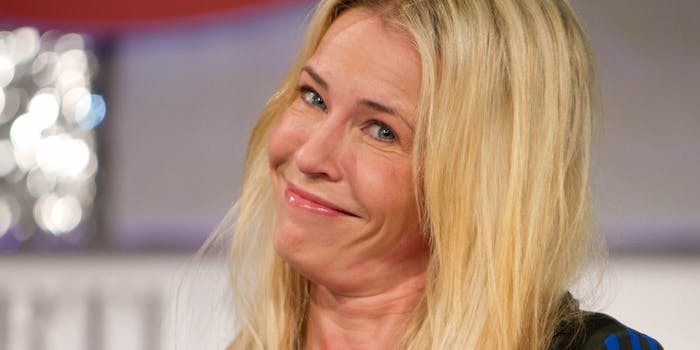 This comedian's R-rated special will make you a believer.

It’s taken me a while, but I think I finally get Chelsea Handler.

Mind you, I get her and can appreciate her singular comedic style, but I wouldn’t consider myself a fan nor would I fork over hard-earned money to see a live performance. Handler’s nothing-sacred approach to humor is on full boil in her new Netflix stand-up special, Chelsea Handler: Uganda Be Kidding Me Live. The 70-minute performance, taped at Chicago’s Harris Theater, is based on her No. 1 New York Times best seller of the same name.

The book and show delve into the comedian’s trip to Uganda, the purpose of which remains somewhat vague. To put a finer point on it, the Netflix special reveals how Handler pokes at her personal demons to fuel observations on life which are—to put it bluntly—cynical, jaded, crude, and often funny. The humor comes from a familiarity that resides at the intersection of our own personal foibles and Handler’s hyperbolic tales of self-indulgence and anger. Some of her yarns, such as having an uncontrollable fit of “the trots” while alone on the beach, appear sadly genuine. They create a tight bond with her audience, who can relate to her ability to get in rather bizarre-yet-commonplace predicaments.

I get Handler’s approach and appreciate her bravado and willingness to follow the path of such previous comic trailblazers as Richard Pryor, George Carlin, Lenny Bruce, and even the late Joan Rivers. These folks were all about boundaries—finding them, testing them, and seeing how hard and how far they could push them. In the case of Bruce and Carlin, testing limits came with a huge price. Handler’s masterful, high-wire, without-a-net series of witty stories (laced with a steady stream of F-bombs) and quips serves a serio-comedic microcosm of our current hyperactive culture. At 39, the talk show host is young enough to be cool and relevant to young audiences yet appealing to older viewers (who like to think they are hip).

What I don’t like is Handler’s inability to structure her bits in a classic setup, tell the tale, punchline manner, which is the standard for all successful comedy. Her narcissism tends to show in her storytelling which sometimes has difficulty getting from Point A to B without multiple diversions. This is especially true in her final segment where the space between setup and punchline seems interminable. In our business, we’d say she needs a good editor.

Not that it’s keeping Handler up at night, but I’m not sure if I’d be waiting breathlessly for her new Netflix talk show. I wrestle with an important question when I watch Handler perform: Does she want us laughing with her or at her?