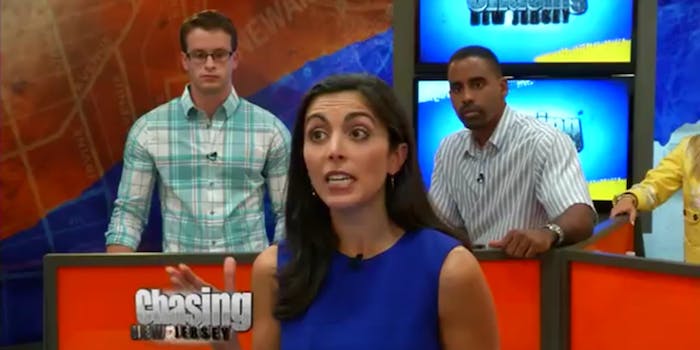 “Chasing New Jersey” is the Garden State’s answer to TMZ

The TMZ-style approach to hard news might seem like devolution to some, but this shift could actually work.

Last Monday, a new show, Chasing New Jersey, debuted on New Jersey station WWOR-TV. It replaced the station’s traditional 10pm nightly news broadcast with something a little more youthful and energetic: Instead of anchors behind a desk reading from teleprompters, reporters sit in a group and recount the day’s big stories. They are led by a host, Bill Spadea, a sleeves-rolled-up political analyst who was once a Republican nominee for Congress. His informal banter mirrors that of TMZ host Harvey Levin.

And TMZ is exactly what Chasing New Jersey is attempting to emulate, from the brightly colored sets to the bold onscreen fonts to the rapid-fire discourse. But instead of stalking celebrities around L.A., they’re “chasing” important local stories, Spadea prompting them with a “Whaddya got?” They’ve looked into New Jersey’s disappearing weed supply:

The day after it debuted, the Fox-owned station’s license was placed under review, to determine whether they are “adequately serving New Jersey.” Still, the response to the show hasn’t been completely negative. Over on their Facebook page, viewers have left comments, asking them to cover certain stories. Their “chasers” are also very interactive on Twitter, which makes them more accessible to New Jersey residents with tips. And while there is an emphasis on reporters physically “chasing” stories, the show incorporates virtual tactics, like using Google Hangouts to interview the President of the New Jersey Second Amendment Society.

The TMZ-style approach to hard news might seem like devolution to some, but this shift could actually work. It might actually be necessary. For all its troubling celebrity worship, TMZ has managed to get scoops major news outlets have missed. Chasing New Jersey is hoping to turn that formula into political and civic success, and engage their viewers in a more direct way. Trademarks filings for other “Chasing” shows have been discovered for Texas and Florida as well, which could mark a bigger shift for local news.